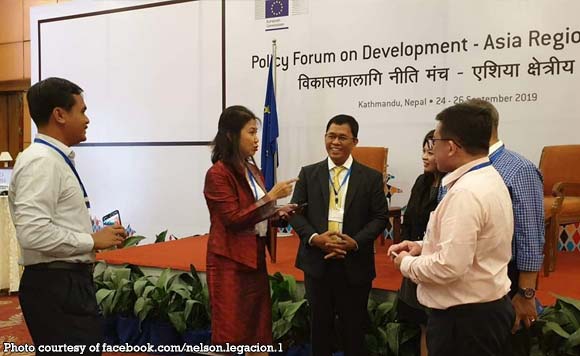 Naga City Mayor Nelson Legacion’s presentation during a conference in Nepal has been well applauded by the participants.

Legacion was the only Filipino to be invited to speak at the Policy Forum on Development (PFD) Asia Regional Meeting in Katmandu, Nepal.

“My presentation on Naga’s CSO-LA cooperation was not only APPLAUDED but also repeatedly LAUDED by the organizers and participants to the Policy Forum on Development (PFD) Asia Regional Meeting in Katmandu, Nepal,” Mayor Legacion said.

Legacion also credited the former local executive chiefs of the city for laying the foundation of a strong Naga City.

“Grateful to former City Mayor and SILG Jesse Robredo for his legacy of good governance and to former Mayor John Bongat for continuing it during his term,” said Legacion.

Legacion likewise thanked several people who contributed to the development of Naga City.

“Grateful also to: (1) former Councilor and Congressman James Jacob and Councilor Miles Raquid Arroyo for their authorship of the Empowerment Ordinance and The People’s Budget Ordinance, respectively; (2) the former and incumbent SP members who supported their passage; (3) the Naga City People’s Council; and (4) the People of Naga,” he said.

“I am honored and happy to serve you, Naga,” added the mayor.