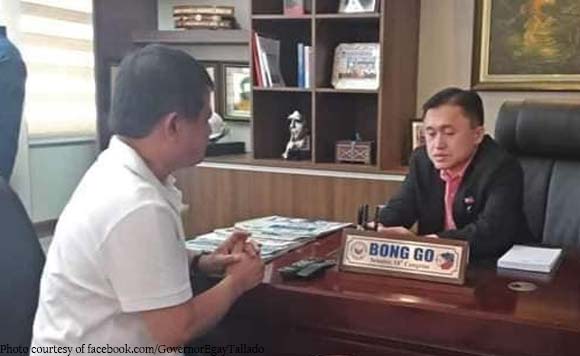 0 392
Share
Want more POLITIKO News? Get the latest newsfeed here. We publish dozens and dozens of politics-only news stories every hour. Click here to get to know more about your politiko - from trivial to crucial. it's our commitment to tell their stories. We follow your favorite POLITIKO like they are rockstars. If you are the politiko, always remember, your side is always our story. Read more. Find out more. Get the latest news here before it spreads on social media. Follow and bookmark this link. https://goo.gl/SvY8Kr

Camarines Norte Governor Edgardo Tallado has sought the assistance of Senator Bong Go for the establishment of a Malasakit Center in the province.

Tallado visited Senator Go in his office to personally handed the letter of request.

Senator Go has filed a bill institutionalizing the establishment of Malasakit Centers in the country.

In his letter, Tallado said the Camarines Norte Provincial Hospital caters to residents of the province as well as those from neighboring provinces Camarines Sur and Quezon.

He said that the hospital only has 150-bed capacity but it serves 350 patients daily.

“This is due to the fact that government hospitals must not refuse any individual seeking medical attention regardless of his or her economic status especially those who belong to our indigent class,” Tallado said.

The governor added that the establishment of Malasakit Center in Camarines Norte will “immensely help” the residents of the province.