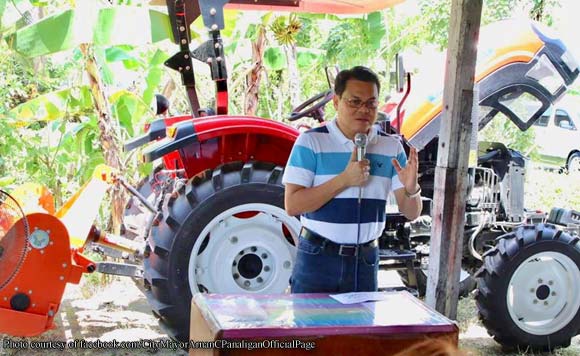 0 1,287
Share
Want more POLITIKO News? Get the latest newsfeed here. We publish dozens and dozens of politics-only news stories every hour. Click here to get to know more about your politiko - from trivial to crucial. it's our commitment to tell their stories. We follow your favorite POLITIKO like they are rockstars. If you are the politiko, always remember, your side is always our story. Read more. Find out more. Get the latest news here before it spreads on social media. Follow and bookmark this link. https://goo.gl/SvY8Kr

Calapan Mayor Arnan Panaligan is bent on making farmers in his city more productive and competitive as more imported rice comes into the country.

Panaligan recently turned over a brand new four-wheel tractor to the Farmers Association of Bgy. Canubing 1, even as he vowed more support for them. The tractor comes from the Department of Agriculture.

A post on Panaligan’s Facebook page stated that the mayor is keen on pursuing farm mechanization as part of his Angat Kabuhayan sa Agrikultura Program.

So even if rice imports come in, there’s a chance our farmers could compete!

“City Mayor Arnan C. Panaligan turned over a brand new4 wheel tractor to the Farmers Association of Bgy. Canubing 1, Calapan City represented by their president, Mr. Gregorio Vecinal. The tractor was given by the Department of Agriculture represented by Agriculture Programs Coordinating Officer, Ms. Collete Quindong. City Agriculturist Ms. Lorelein Sevilla was also present during the turn over. Farm mechanization is one of the component projects of AKAP or Angat Kabuhayan sa Agrikultura Program, the flagship program of the City Government of Calapan in agricultural production. Mayor Panaligan said that farm mechanization is one of the interventions that can make farmers more productive and competitive in the light of the liberalization of rice importation under Republic Act 11023,” Panaligan’s Facebook page posted.