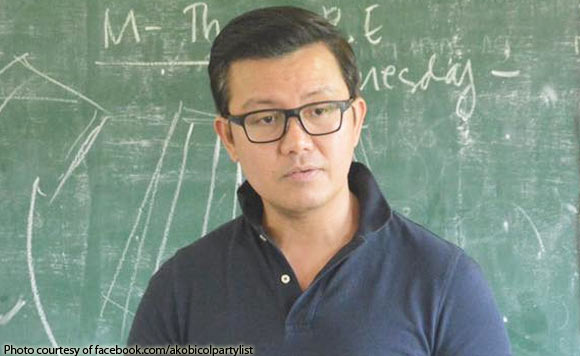 0 1,229
Share
Want more POLITIKO News? Get the latest newsfeed here. We publish dozens and dozens of politics-only news stories every hour. Click here to get to know more about your politiko - from trivial to crucial. it's our commitment to tell their stories. We follow your favorite POLITIKO like they are rockstars. If you are the politiko, always remember, your side is always our story. Read more. Find out more. Get the latest news here before it spreads on social media. Follow and bookmark this link. https://goo.gl/SvY8Kr

Ako Bicol Rep. Alfredo Garbin has condemned anew the granting of bail to the alleged mastermind of the killing of former Rep. Rodel Batocabe.

The Ako Bicol solon, in his privilege speech last Monday, scored Judge Maria Theresa San Juan Loquillano of Legazpi City RTC for granting the bail despite the “overwhelming evidence to point that Baldo is the mastermind of the killing.”

“Murder is non-bailable crime yet with one stroke of a pen this judge revisits to the families of the victim the pain of losing their loved ones,” Garbin said in speech.

“We cannot fathom how the judge could have made such a ruling when evidence is overwhelming against Baldo,” he added.

The solon noted that there is enough evidence to convict and definitely “more than enough to deny bail.”

Garbin also pointed out that since Baldo is charged with a non-bailable offense, his bail request is not a matter of right but only discretionary on the part of the judge provided that the evidence of guilt is not strong.

“The prosecution showes that the evidence of guilt is strong enough to warrant the denial of their petition to be allowed to post bail.”

Garbin said that it appears that “legal gymnastics” were made in order to ignore the direct testimonies and spontaneous declarations pointing Baldo as the “main culprit” in the killing of Batocabe and his aide.

Garbin said that they hope the court will reconsider its decision so that “justice may ultimately prevail.”