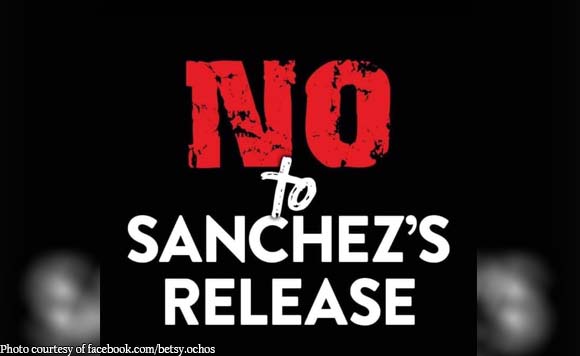 Albay Vice Gov. Grex Lagman is one of the many outraged by the possible release of rape-slay suspect Antonio Sanchez, and he will not allow it to happen if he could help it.

Lagman said Eileen Sarmenta, whom Sanchez raped and killed along with Allan Gomez, was his batch mate in Benedictine Abbey.

He said he could not fathom how the Department of Justice could consider releasing Sanchez for good conduct time allowance since he was caught with illegal drugs in his prison cell and has been enjoying illegal perks, including an aircon, TV, and access to a cellphone.

According to the Vice Governor, the law must be amended if it would allow people like Sanchez to walk free after having their sentences reduced.

But people could still do something to prevent an injustice by signing the petition, he said.

“Eileen Sarmenta was my batchmate in high school. She was a graduating UPLB student when she was gang-raped and murdered by Mayor Antonio Sanchez and his men in 1993. In 1999, the SC upheld their 1995 conviction for these unspeakable crimes.

In two months’ time, Sanchez will be released by the Bureau of Pardons and Parole. This is because of RA 10592 which allows the deduction from the prison terms of convicts because of good conduct time. DOJ Secretary Menardo Guevarra has confirmed that Sanchez is on the list.

The DOJ must be put to task as to how Sanchez’s good conduct time was actually computed and, more importantly, if he actually exhibited good conduct. Especially when in 2006 and 2010 Sanchez was caught in his prison cell in possesion of marijuana and shabu, respectively. He has also been illegally enjoying perks while in prison like having an airconditioner, flat screen television and access to a celphone. All these negate “good conduct” while incarcerated.

The law must also be amended to admit of exceptions in its application relative to certain heinous crimes similar to the depravity and inhumanity as that of Sanchez’s. This is to prevent manifest injustice to Eileen Sarmenta and her heirs as well as to all who are similarly situated.

I ask everyone who wants justice for Eileen to sign the online petition which i saw in Bene Batch 89’s page earlier today. Please type this link: http://chng.it/5N77WqfKpQ,” Lagman posted.