Marinduque Gov. Velasco inducted as national president of League of Provinces of the Philippines 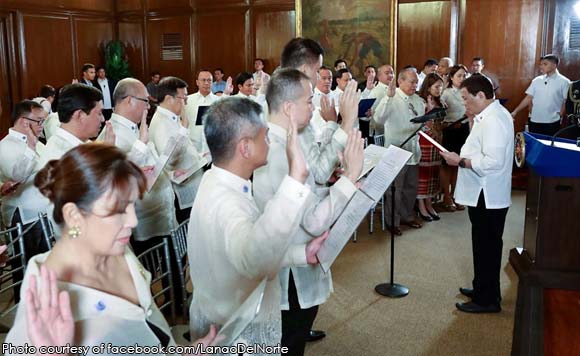 0 1,268
Share
Want more POLITIKO News? Get the latest newsfeed here. We publish dozens and dozens of politics-only news stories every hour. Click here to get to know more about your politiko - from trivial to crucial. it's our commitment to tell their stories. We follow your favorite POLITIKO like they are rockstars. If you are the politiko, always remember, your side is always our story. Read more. Find out more. Get the latest news here before it spreads on social media. Follow and bookmark this link. https://goo.gl/SvY8Kr

Marinduque Governor Presbitero J. Velasco, Jr. has formally taken his oath as the national president of League of Provinces of the Philippines before President Rodrigo R. Duterte.

President Duterte inducted the new set of officers of the League of Provinces of the Philippines in the President’s Hall at the Malacanan Palace last August 6.

“Velasco, a retired associate justice of the Supreme Court, and Cua, former representative of the Lone District of Quirino who chaired the House Committee on Ways and Means during the 17th Congress, are expected to lead the League in pushing for its advocacies, such as the immediate implementation by the national government on the decision of the Supreme Court in the Mandanas case mandating that LGUs should have a 40% share in all national tax collections, and the necessary transitions to ensure the implementation of the Universal Health Care Act,” the LPP said in a statement.

“Govs. Velasco and Cua have likewise reiterated the League’s commitment to support the 0 to 10 Priority Agenda of the Duterte Administration toward the achievement of the goals and objectives in the 2017-2022 Philippine Development Plan and the AmBisyon Natin 2040,” it added.