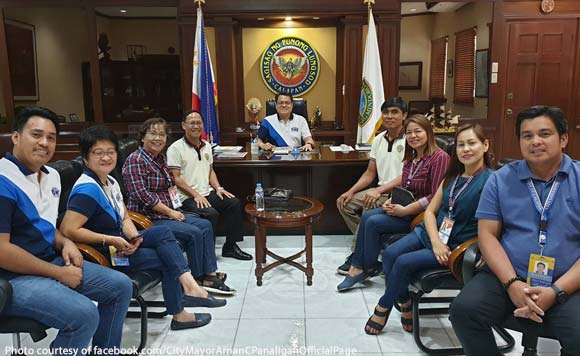 0 608
Share
Want more POLITIKO News? Get the latest newsfeed here. We publish dozens and dozens of politics-only news stories every hour. Click here to get to know more about your politiko - from trivial to crucial. it's our commitment to tell their stories. We follow your favorite POLITIKO like they are rockstars. If you are the politiko, always remember, your side is always our story. Read more. Find out more. Get the latest news here before it spreads on social media. Follow and bookmark this link. https://goo.gl/SvY8Kr

Calapan City Mayor Arnan Panaligan has welcomed in his office the key local government officials from the City Government of Santiago, Isabela.

The officials visited Calapan to observe the best practices pertaining to e-governance.

The contingent was led by Atty. Artemio Villaluz, head of the Business Permits and Licensing Office of the City Government of Santiago.

The visit aims to coordinate the conduct of a nationwide earthquake and tsunami drill on November 14 with Calapan City as the national venue.