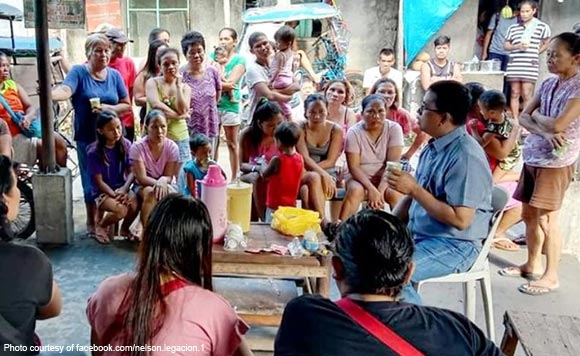 Naga City Mayor Nelson Legacion has brought the services of the city government through his series of community meetings.

Legacion started “connecting with the people” yesterday with his 7:30 am series of Community Meetings held at LBC Compound in Barangay Sabang.

“Heeding the residents’ request, Mayor Son directed the installation, within the soonest possible time, of a flap gate at the Barangay Waterway to resolve the recurring flooding in the area and to construct a 2-storey community hall to serve as evacuation center as well as a Livelihood Center under the newly launched Livelihood Challenge Fund Program,” said the city government.

Meanwhile, just recently, the validation for the Presidential Award for Child-Friendly Municipalities and Cities (PACFMC) has ended.

“The national validators lauded the city for its ongoing projects, facilities, and designated personnel catered to the youth,” said the city government.

“The PACFMC is spearheaded by the Department of Social Welfare and Development (DSWD) – Council for the Welfare of Children (CWC) which gives recognition to LGU’s efforts in promoting children’s rights and welfare.”