Abaca making a comeback in Catanduanes 3 years after ‘Nina’ 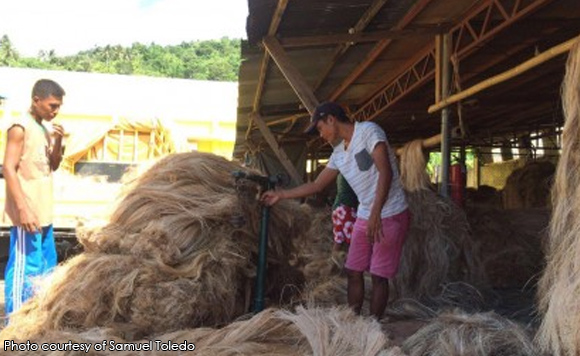 LEGAZPI CITY – The abaca industry in Catanduanes is now gradually bouncing back after its devastation when the island was directly hit by Typhoon Nina (Nock-ten) on Christmas Eve in 2016.

Quoting data from the Fiber Industry Development Authority (FIDA) and the Philippine Statistics Authority (PSA), Angel Valeza, supervising agriculturist of the Office of the Provincial Agriculture (OPAG) in Catanduanes, said that the over 12,000 farmers working in more than 33,000 hectares of abaca plantations across the abaca-rich island are now benefiting from the recovery.

Catanduanes is again contributing a hefty 84.78 percent of Bicol’s abaca fiber production, or 30.95 percent of the country’s total produce, he told the Philippine News Agency.

“This is the reason why Catanduanes earns the moniker ‘Abaca County’ for being the biggest abaca producer not only in Bicol but in the entire country,” Valeza said.

However, “when Typhoon Nina hit Catanduanes in 2016, the production dropped by at least 13 percent in 2017,” he said.

Tria said partial computations show that 2018 and 2019 would significantly exceed the 2017 production.

“A factor to this higher abaca fiber production is the absence of strong typhoons in the past two years that used to hit Catanduanes in the previous years,” he noted.

Ariel Tabuzo, OPAG abaca coordinator, said that an abaca rehabilitation fund of PHP50 million was released from 2017 to 2018 by the Department of Agriculture to the affected abaca farmers due to Typhoon Nina.

He said farmers whose abaca plantations were heavily affected received PHP4,670 each, while those moderately- and slightly affected were handed PHP2,400 each, through a “cash-for-work” scheme.

According to Tabuzo, they have started programs that would improve abaca fiber production, including the use of machines that would mechanize abaca stripping.

“By using mechanized stripping rather than the present hand-made stripping, production of abaca fiber will significantly improve,” Tabuzo said.

The biggest buyer of abaca fiber in the island is the Pinoy Lingap Damayan Multi-Purpose Cooperative (PLDC), a non-government organization that is also engaged in lending business for abaca farmers.

“Aside from buying abaca fiber, we also lend money to our members to at least augment their financial needs while waiting for their abaca plants to mature for stripping,” Sorreda said.

Farmer Armando Taroy, 49, said that he has been engaged in abaca planting and stripping for 14 years already.

“Abaca farming is our major source of livelihood. We have vast abaca plantations in Catanduanes. They really grow in abundance,” Taroy, a resident of Barangay Bagumbayan in Bato town, told PNA.

Meanwhile, the Catanduanes Provincial Tourism Office (CPTO) is now coordinating with the OPAG, DA and the Department of Tourism for the establishment of a so-called “abaca village” as part of their tourism promotion in the Pacific-facing island.

CPTO chief Carmel Bonifacio-Garcia said that this “abaca village” would serve as a “one-stop shop” that would showcase the abaca production in Catanduanes.

“Since abaca is our major commodity, it is just proper if we will tap it for our tourism promotion here,” she told PNA.

Aside from being the largest producer of high-grade abaca fiber in the country, Garcia said Catanduanes is also abundant in “ridge-to-reef” tourist spots spread out across the island.

“We have plenty of black and white sand beaches, falls, lagoons, points and surfing destinations, among others, here in Catanduanes,” Garcia added, while showing an advocacy placard bearing the branding “Happy Island”. (PNA)