Suspended Gov. Cua says he will fight for the people of Catanduanes 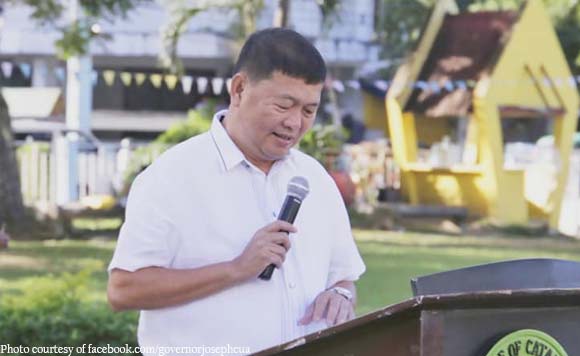 Re-elected Governor Joseph C. Cua assured the people of Catanduanes that he will relentless fight for their mandate of choosing him as the province’s chief executive, despite uncertainties in assuming the post.

Cua has served a six-month preventive suspension from the Office of the Ombudsman on allegations of abuse of authority over a contractor’s use of a capitol-owned vacant lot.

The DILG then meted Cua with another one-year suspension directing cease and desist from performing the functions and responsibilities of his office until the suspension for one year without pay is fully served.

“My door is not only in the Capitol; it is always open here in my heart as a public servant. They can never close it nor bar me from opening this for my people, the Catandunganon,” Cua said during the oath taking ceremony of elected officials last June 30.

Cua said his camp received an advanced verbal information from the DILG of a “bad news.”

Meanwhile, Cua’s camp was positive that he would assume office in this month after a landslide win in the gubernatorial race.

“I want you to remember that I am in pain not because I am disbarred to hold my office. That would be too superficial and selfish. The feeling that I have now is my regret that I made you an orphan when you have spoken, in the noble exercise of your fundamental democratic right, that you wanted me to be the father of this province as manifested by the election,” Cua said.