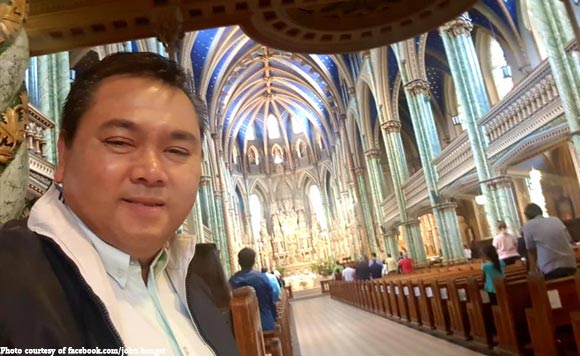 Outgoing Naga City Mayor John Bongat has attended a mass in Ottawa, Canada on his birthday, June 24, to make a birthday wish.

Bongat flew to Canada for a speaking engagement.

The outgoing Mayor said that he attended mass to make a wish and at the same time to thank God for all the blessings he received.

“I ATTENDED MASS NOONTIME at the historic Notre Dame Cathedral in Ottawa, during the conference lunch break, to make a birthday wish,” he said.

“At the same time, I had to thank God for all His blessings upon my family. And lastly, to honor my favorite saint, St. John the Baptist whose feast is being celebrated today, June 24 (Eastern time) here in Canada,” Bongat added.

Bongat also said that he was named after St. John the Baptist.

“The ornate Ottawa cathedral was constructed between 1841 to 1865, inspired by French Gothic architecture of the original Notre Dame Basilica in Paris which was built 7 centuries earlier in 1163. Unfortunately, Notre Dame Paris was gutted by fire last April 16, 2019, but restoration efforts are ongoing,” Bongat shared.

Bongat will step down as Mayor on June 30 after serving three terms for a total of 9 years.