Outgoing Naga Mayor Bongat thanks Brgys. Mabolo, Triangulo for their tribute to him 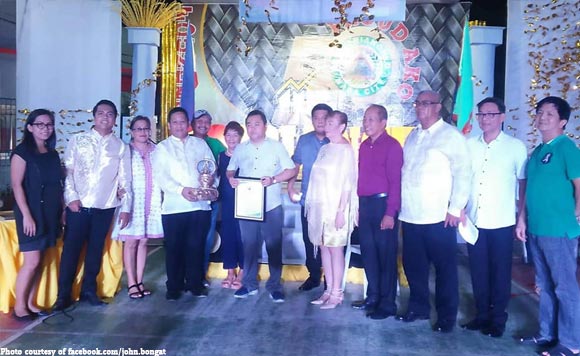 0 381
Share
Want more POLITIKO News? Get the latest newsfeed here. We publish dozens and dozens of politics-only news stories every hour. Click here to get to know more about your politiko - from trivial to crucial. it's our commitment to tell their stories. We follow your favorite POLITIKO like they are rockstars. If you are the politiko, always remember, your side is always our story. Read more. Find out more. Get the latest news here before it spreads on social media. Follow and bookmark this link. https://goo.gl/SvY8Kr

Outgoing Naga City Mayot John Bongat has expressed his gratitude to Barangays Mabolo and Triangulo for giving him a tribute.

Bongat leaves the country for an official travel for a speaking engagement in Ottawa, Canada.

“MABALOS Brgy Mabolo headed by P/B Ramil Job and Brgy Triangulo headed by P/B Allan Beriso, the last 2 barangays of Naga that paid their tribute to me last night, before I leave for Manila today and to Canada on official travel (as usual, no expense on the part of the city) for a speaking engagement in Ottawa thru the International Metropolis Conference Organizing Committee which is sponsoring my round trip airfare and hotel accommodation for 6 nights, among others,” Mayor Bongat said

“My travel to Canada will also be an opportunity to see the Bicolandia association there headed by their President, Atty. Earl Francis Oriño Dacara, and strengthen ties of Naga with our fellow Nagueňos/ňas and Bicolanos/nas who have found their new home in Canada,” he added.

Bongat thanked the said barangays for the kind words and their thoughtfulness as he spends his remaining days in office.

Mayor Bongat will step down in office on June 30 after serving three terms or nine years in office.

“I wish to thank you, Brgys Mabolo and Triangulo, for your thoughtfulness and kind words like the other barangays who made their existence felt during the last few days of my tenure as I step down as Mayor of Naga on June 30,” the mayor said.

“I’m proud to have been given the opportunity to serve you! Thanks for this beautiful painting Brgy Mabolo and this image of Ina handmade by no less than P/B Beriso himself of Triangulo, and for the resolutions of gratitude passed by your respective Brgy Councils,” he added