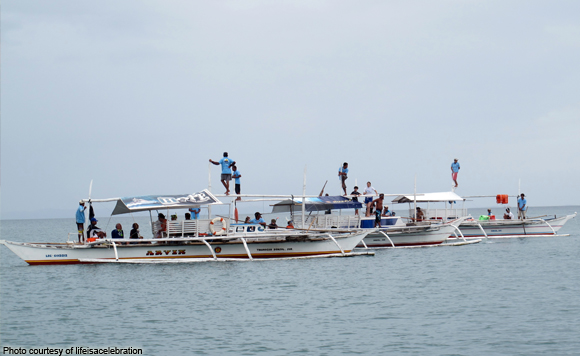 The captain of the San Jose, Occidental Mindoro-based F/B Gem-Ver maintained that he and his crew were minding their own business when a reported Chinese fishing vessel appeared out of nowhere and struck them while anchored off Recto Bank midnight of June 9.

“It was around 12 midnight. We were anchored and we were showing a lot of white bright lights to signal our position, when a ship suddenly appeared out of nowhere and hit us. It was fast, I was trying to start our engine when we were hit in the stern, cutting it off from the rest of our boat,” June Insigne, 43, said in Filipino when asked by reporters on the circumstances of the incident that capsized their boat, tossing him and his crew to the sea.

Insigne said they were doing nothing provocative to warrant such actions by the suspected Chinese fishing vessel.

“We were lucky that we were hit in the stern. If we were struck in the middle, the boat would have been cut in half and it would have sunk immediately,” he said.

Insigne, a veteran fisherman, said the Chinese fishing vessel stopped after his boat capsized, then circled them.

“We thought it was going to pick us up from the water and rescue us.
However, it turned off its lights and turned away before speeding up,”
he added.

Insigne said they were floating for three hours before they were rescued by a Vietnamese fishing vessel some five miles away.

He added that the Vietnamese ship managed to learn of their predicament when two of his men, whom he instructed to contact the vessel, were able to make their situation known by 2 a.m.

“The Vietnamese ship managed to rescue all of us by 3 a.m.,” Insigne said.

The fisherman said the Vietnamese crew fed them, gave them time to rest, and provided them with other necessities, including radio communications, which they used to contact their fishing boat’s owner.

Eventually, F/B Gem-Ver’s sister ship picked them up from the Vietnamese vessel before they were transferred to the BRP Ramon Alcaraz.

Insigne said he was sure it was a Chinese fishing vessel that hit them based on the fishing equipment it was using, which included a “Superlight” and metal.

He said this was the first time that he was struck by a Chinese vessel, an incident that has deeply scarred him and his crew.

The boat captain believes that their boat was struck intentionally, noting that if it were an accident, the offending vessel would have immediately stopped and picked them up from the waters.

“We were anchored and resting as we spent the entire day fishing. We were surprised when it suddenly appeared and hit us. In the past, when it comes alongside us, it just stays with us in peace,” he related.

Insigne also described the Chinese vessel as larger than his fishing boat.

At the time their boat was hit, he said,they have caught about three tons of assorted fish, including “lapu-lapu” (grouper).

Members of the media earlier boarded the BRP Tausug (LC-295) in San Jose town to meet up with the BRP Ramon Alcaraz (PS-16), which was transporting Insigne and his crew.

There, medical staff of the naval ship treated the fishermen and provided them with medicines and food. The two naval ships met off the northeastern part of Capulong Island, Occidental Mindoro.

Insigne said he hoped that the government would do something to aid their operator in terms of financial losses. (PNA)