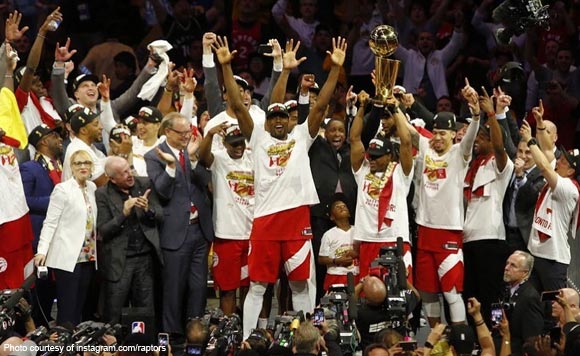 Raptors dethroned the injury-laden Golden State Warriors in the Game 6 of the NBA Finals today, 114-110.

Warriors lost superstars Kevin Durant in Game 5 and Klay Thompson in Game 6 due to injuries.

“Congratulations, Toronto Raptors! All championship teams have martyrs. And here’s two ex-Raps that are. Let’s not allow their indispensable contribution in laying the foundation for this team’s recent success be left unnoticed. Let us not allow them to be unsung heroes,” Lagman said.

“As a true fan of basketball, here’s my heartfelt congratulations to original Raps DeMar DeRozan and coach Dwane Casey! Sana may “honorary champs” acknowledgement for them,” he said.

Lagman earlier said that he’s rooting for the the Toronto Raptors, a team that “challenges the status quo.”

“I like the Toronto Raptors just because it’s a Canadian team. It’s not that i dislike the dominance of American teams in the NBA. I just love the thought of anything that challenges the status quo–especially if it upends a cultural basketball behemoth,” said Lagman.

This is the first championship of the Toronto Raptors in its 24-year franchise history.