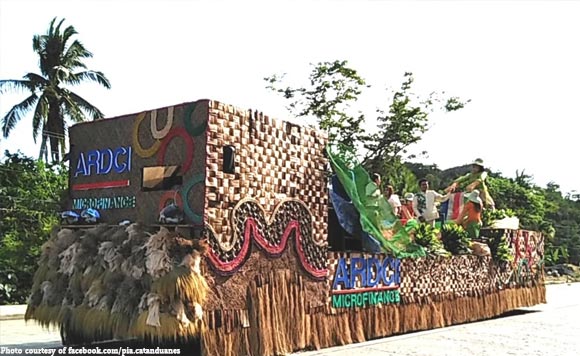 Abaca floats were paraded on the streets in Catanduanes during the opening ceremony of the Abaca Festival 2019.

Hailed as champion during the Karosa nin Abaca was the abaca float of the Agricultural Rural Development Cooperative, Inc. (ARDCI) Microfinance.

The ARDCI’s winning float is made of 90% abaca and coconut rings that symbolize the strength in unity and the team’s sustainability.

“The storyline depicts the chain production in the abaca industry from the first process of abaca farming such as paghag-ot to paghabolthat presents the vibrant economy and rich culture of the island,” the province said.

On the other hand, Department of Education- Catanduanes clinched 1st runner up while FICELCO finished 2ndrunner up.

“Dubbed as the ‘Karosa nin Abaca,’ the floats form part of the festivities’ main competition participated in by different public and private agencies in the province,” the province said.

“The parade became a spectacle as walking contingents from different local government units, private sectors, national agencies, non-government organizations, government-owned and controlled corporations converged with the abaca floats and led straight to Capitol Grounds where the Opening Ceremonies was held,” it added.