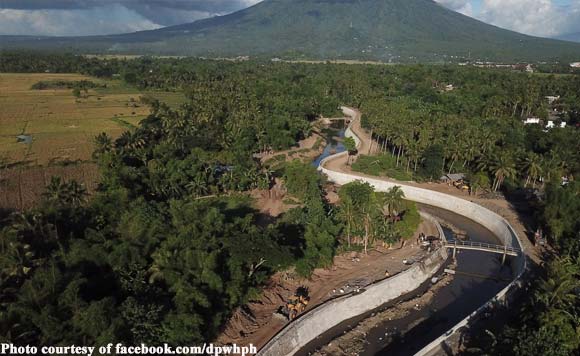 0 1,509
Share
Want more POLITIKO News? Get the latest newsfeed here. We publish dozens and dozens of politics-only news stories every hour. Click here to get to know more about your politiko - from trivial to crucial. it's our commitment to tell their stories. We follow your favorite POLITIKO like they are rockstars. If you are the politiko, always remember, your side is always our story. Read more. Find out more. Get the latest news here before it spreads on social media. Follow and bookmark this link. https://goo.gl/SvY8Kr

Department of Public Works and Highways (DPWH) Secretary Mark A. Villar has announced that his office has completed a multi-million flood control structure that will help mitigate flooding in Nabua town in Camarines Sur.

Villar said that the project cost of P130 million.

He added that the 2.54-kilometer river walls were completed along “critical sections of Waras River in Sta. Elena and Sta. Lucia towns which are frequented by overflowing of river especially in the occurence of typhoons and heavy rains.

It can be recalled that Tropical Depression “Usman” in December of 2018 caused vast areas in Nabua and Baao to be submerged in floodwater which was brought by the overflowing of Waras River.

“Substantial investments in infrastructure are being made by the government to ensure that we prevent the damages of climate change to the lives and properties of our people especially in disaster-prone areas,” Villar was quoted as saying.

The department also said that its Camarines Sur 4th District Engineering Office (DEO) has included in its 2019 proposed project, an additional amount of P36.2 million to extend the construction and maintenance of revetment walls along Waras River.