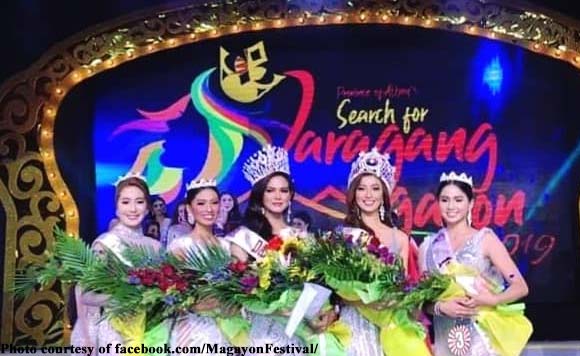 0 806
Share
Want more POLITIKO News? Get the latest newsfeed here. We publish dozens and dozens of politics-only news stories every hour. Click here to get to know more about your politiko - from trivial to crucial. it's our commitment to tell their stories. We follow your favorite POLITIKO like they are rockstars. If you are the politiko, always remember, your side is always our story. Read more. Find out more. Get the latest news here before it spreads on social media. Follow and bookmark this link. https://goo.gl/SvY8Kr

The Province of Albay has crowned the new Mutya ng Magayon last night in an event inspired by the movie “The Greatest Show.”

The Albay Astrodome stage was transformed last night into a virtual Big Top Circus to play host to what is undoubtedly the “biggest and greatest event of this Year’s Magayon Festival.”

Albay Governor Al Francis Bichara welcomed everybody as he thanked all those who were involved in the mounting of the Mutya ng Magayon 2019, specially her sisters, celebrity choreographer Maribeth Bichara, and Ms. Ana Marie Bichara.

“As you can see, we have lived up to the Magayon nametag, everything ton ight is magayon, and we assure you that each year we will make it even more magayon,” Bichara said.

He also acknowledged the efforts of Ms. Dorothy Colle, Albay Provincial Tourism, Culture, and Arts Officer, and the rest of her staff at the PTCAO for a job well done, not just for the night, but also for the whole month-long Magayon Festival 2019.