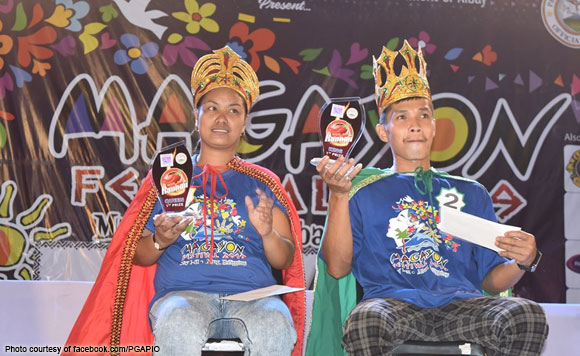 0 573
Share
Want more POLITIKO News? Get the latest newsfeed here. We publish dozens and dozens of politics-only news stories every hour. Click here to get to know more about your politiko - from trivial to crucial. it's our commitment to tell their stories. We follow your favorite POLITIKO like they are rockstars. If you are the politiko, always remember, your side is always our story. Read more. Find out more. Get the latest news here before it spreads on social media. Follow and bookmark this link. https://goo.gl/SvY8Kr

The new Sili King and Queen have been crowned in Albay during the recently concluded Hot-aw sa Kaonan as part of the Magayon Festival 2019.

Twenty contestants vied for the title last May 22. The event was spearheaded by the Provincial Government of Albay at the Penaranda Park, Legazpi City.

Representatives from Camalig and Legazpi were named winners of the Hot-aw sa Kaonan event.

“Contestants coming from the different cities and municipalities of the province underwent a medical examination facilitated by the representatives of Provincial Health Office (PHO) and Provincial Tourism, Culture and the Arts Office (PTCAO) two hours prior to the start of the event to secure the medical condition of the contestants preventing unwanted incidents that may occur during the event,” the province said.

“As per the rules set, each contestant must be able to eat one bowl of Bicol express and gulay na laing with chili weighing 200 grams. Whoever finished eating it the fastest, will be declared as the winner,” it added.

Mr. Jayson Nimo of Camalig, Albay was declared as the new Sili King who was able to finish eating in 50 seconds.

On the other hand, Ms. Mary Jane Soro of Taysan, Legazpi City was hailed as the new Sili Queen 2019 who narrowly edged out Ms. Hazel Moral.

Ms. Dorothy F. Colle, the Provincial Tourism, Culture and the Arts Officer, said that the competition is a good avenue to determine the pride of our province in terms of eating our very own “SILI”.

The event is in-line with the month-long celebration of the Magayon Festival.