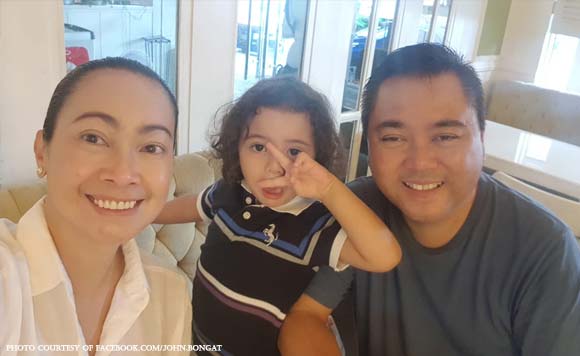 0 369
Share
Want more POLITIKO News? Get the latest newsfeed here. We publish dozens and dozens of politics-only news stories every hour. Click here to get to know more about your politiko - from trivial to crucial. it's our commitment to tell their stories. We follow your favorite POLITIKO like they are rockstars. If you are the politiko, always remember, your side is always our story. Read more. Find out more. Get the latest news here before it spreads on social media. Follow and bookmark this link. https://goo.gl/SvY8Kr

Naga City Mayor John Bongat spent his first mass and Sunday lunch without his eldest child Jade who has been sent to China for an educational trip.

Bongat earlier sent off Jade to China together with other Bicolano students to join this free educational trip to some cities in China, including Beijing, sponsored by Shi Shi Townmates Association of the Philippines.

“OUR FIRST AFTER MASS Sunday lunch date without the unica hija, with only the unico hijo in tow,” Bongat said.

“Ate Jade is not around because she is part of the contingent of Naga City high school students afforded the privilege of enjoying a 2-week all expense paid educational trip to different cities in mainland China, courtesy of the Shi Shi Townmates Association of the Philippines,” he added.

The mayor said that Shi Shi City in southern China is the only China-based sister city of our of Naga.

“Many Bicolanos, Nagueňos in particular of Chinese descent, trace their roots in that progressive, historic and highly industrialized city,” Bongat said.

The mayor said that the trip is a good opportunity for Jade to learn on her own.

“Take care big girl Jadee, and it’s good for you to learn to be on your own, at least for 2 weeks. Enjoy and learn,” he said.