All set for 20th edition of Albay’s Magayon Festival 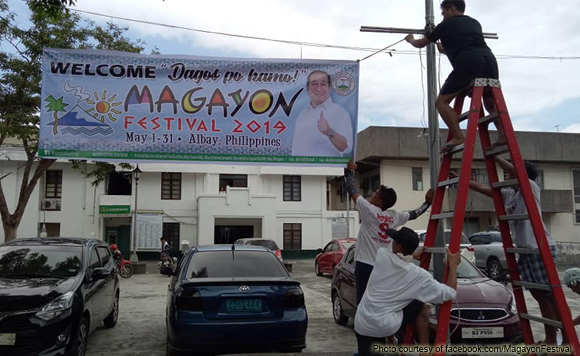 0 521
Share
Want more POLITIKO News? Get the latest newsfeed here. We publish dozens and dozens of politics-only news stories every hour. Click here to get to know more about your politiko - from trivial to crucial. it's our commitment to tell their stories. We follow your favorite POLITIKO like they are rockstars. If you are the politiko, always remember, your side is always our story. Read more. Find out more. Get the latest news here before it spreads on social media. Follow and bookmark this link. https://goo.gl/SvY8Kr

The 20th edition of the month-long Magayon Festival will open on May 1, which is seen to attract thousands of tourists in Legazpi City.

The Albay Provincial Tourism, Culture, and Arts Office said that the Festival will start with “time-honored events” which would attract participants.

“Top-billing the day’s activities is the Albay Festival Showdown where various cities and municipalities of the Province of Albay showcase their local festivals in a street presentation. The colorful and joyful parade will start at 3:00 pm from Vel-Amor Subdivision to Penaranda Park,” the province said.

This year’s festival will feature for the first time the Albay Agri Fiesta Float Parade which will showcase top agricultural products coming from the cities and municipalities of Albay.

“At night, the Albay skyline will once again light up as fireworks shall usher in the official opening of the Magayon Festival 2019 during a program at the Penaranda Park at 6:00 pm with Governor Al Bichara,” said the province.

“Afterwards, and opening concert will follow featuring the comedian Boobsie and the a musical performance by This Band,” it added.

The Magayon Festival Food Stalls and Beer Plaza will also be opened on May 1.

“Ribbon cutting ceremonies for the beer plaza, along with the trade fair, photo exhibit, and throwback art exhibit showcased in the Albay capitol Atrium, front lobby, and Penaranda Park will simultaneously be done at 2:00 pm to be led by Albay Governor Al Francis Bichara,” said the province.

The provincial government said that participants may “[e]xpect more activities for a fun-filled 20th Magayon Festival only in Albay.”