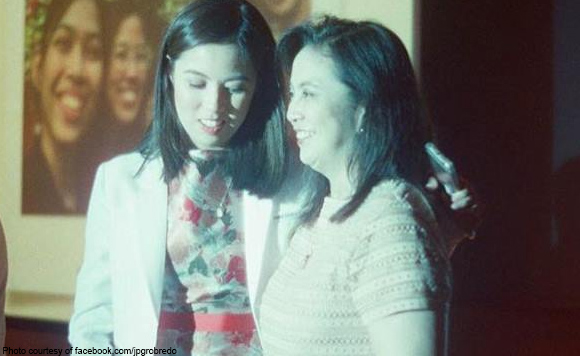 For Vice President Leni Robredo’s birthday, her second daughter Tricia gave people a glimpse of her parenting style as she expressed her love for her mom in a touching Facebook post.

Tricia, in her post, shared that the Vice President had been the stern one while they were growing up, while her dad Jesse was the indulgent parent.

Robredo was the parent who would ask her daughters after swim meets why their strokes were a bit off or why they were slower, and was the one who would push them to practice their piano pieces even if they were crying.

When Tricia got her first heart break, her mom told her to focus on her studies. When she was nervous over exams, her mom was frustrated at her panic and lack of confidence, And when she would complain, her mom would tell her to stay focused, do her work and be kind.

It had been hard for Tricia to understand her mom’s ways and seeming lack of emotions when she was growing up, but now she has come to realize that her mom’s feelings have always been there. But she did not let it hamper her from pushing her daughters to do what they have to.

Robredo, Tricia recalled, stayed up late with her while she was crying and prayed the novena when she was taking a test. When she is having a bad day, her mom would fetch her and share a meal with her.

But at the same time, Robredo would make sure her daughters are ready to face what lies ahead and would stay their course.

She truly is their norths star, without whom they would be lost!

“Between you and Papa, you’ve always been the stern parent, who I’m sure we all feared at one point. He was more indulgent and sentimental, while you were more structured and stoic.

Instead of congratulating us after our events, you’d ask us why our strokes were a little off and why we swam half a second slower than our best times. Instead of letting us rest after weekday dinners, you’d ask us to go through our piano pieces several times until we achieved a clean run. Crying or not.

The night of my first heartbreak, the most comforting words I heard from you were “bata ka pa anak aral ka na” lol. The day I fussed over an important exam, you expressed frustration over my panicking and my lack of confidence, instead of just wishing me luck. And whenever I complain about inconveniences and awful experiences at the workplace, your replies have always been consistent – stay focused, do your work, and be kind anyway.

Growing up, it’s been difficult to understand your ways. I often wondered whether you were still human for showing minimal emotion in situations that would normally elicit intense reactions. But now that I’m older, I realize that the feelings have actually always been there. They just won’t get in the way of doing what we have to do.

Although you sat quite uncomfortably, you still stayed up with me until I was done crying, even when you had to leave at 3AM for fieldwork the next day. You played it cool, but you were caught praying the novena the same time I was taking a test. And, especially on bad days, you offer to pick me after my shift to take me out to unw(h)ind and eat.

But when it’s all done, you’d make sure that I tied my hair back, rolled up my sleeves, and powered the heck through.

You were never the type to tell us to follow our hearts, because you are the first to ask us to keep it in check. And in a world where it would be excusable to fall into the cycle of bickering, breaking and living in hate, you wouldn’t take excuses and you’d remind us to stay our course.

I still stumble at times, but I would’ve done a lot worse if it weren’t for you. 😅You are my North Star, Mama. Happy birthday ily. ❤️,” Tricia posted.