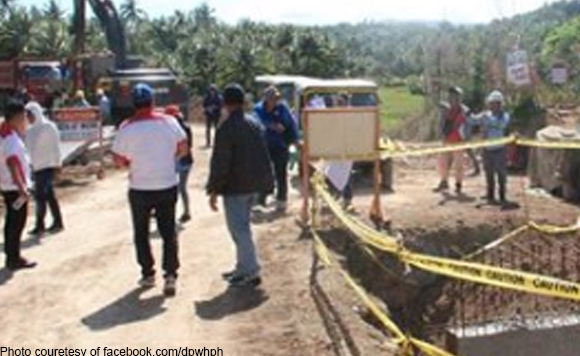 The Department of Public Works and Highways (DPWH) has begun the construction and improvement of a circumferential road in Rapu-Rapu town in Albay.

The DPWH, led by Regional Office V Director Virgilio Eduarte, spearheaded the groundbreaking of the Batan Circumferential Road (BCR) in the municipality of Rapu-Rapu.

According to the department, the infrastructure project is envisioned as a 52.4 kilometers of road around Batan Island – an isolated but “emerging tourist destination of Albay boasting pristine beaches, waterfalls, and cave.”

“Aside from enhancing the mobility of people in the island and gradually lead to the socio-economic development in the area, this road project will play a vital role in tourism development of the entire province,” Director Eduarte was quoted as saying.

Eduarte said that there are two ongoing contracts under BCR Project amounting to P90 million but the whole circumferential road will need around P2 Billion to complete.

Meanwhile, the DPWH is also proposing the construction of a 1.5-kilometer bridge that will connect BCR with Barangay Mancao as entry point to Cagraray Island in an effort to further connect it to the mainland Albay.

“One of Albay’s famous tourist destinations – Misibis Bay – is located in Cagraray Island. Building a bridge to Cagraray will only encourage tourists to explore its neighbor and equally-beautiful Batan Island,” said Director Eduarte.