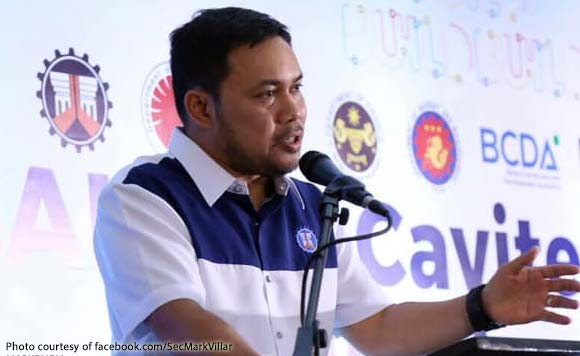 0 664
Share
Want more POLITIKO News? Get the latest newsfeed here. We publish dozens and dozens of politics-only news stories every hour. Click here to get to know more about your politiko - from trivial to crucial. it's our commitment to tell their stories. We follow your favorite POLITIKO like they are rockstars. If you are the politiko, always remember, your side is always our story. Read more. Find out more. Get the latest news here before it spreads on social media. Follow and bookmark this link. https://goo.gl/SvY8Kr

Public Works and Highways Secretary Mark A. Villar has lauded the environmental projects of DPWH Camarines Norte District Engineering Office which bagged the distinction as a “Planet-Wise Organization” at the recent World Water Day Awards 2019.

Villar hailed the said engineering office for its commitment to achieving environment sustainability.

“The honor given to DPWH Camarines Norte DEO for spearheading programs that made strive in achieving water and water-environment sustainability is a manifestation of the Department’s overall commitment for safety, health and survival”, Secretary Villar was quoted as saying.

The said Annual Awards during the World Water Day celebrated every 22nd day of March is a joint program of the Department of Environment and Natural Resources, National Water Resources Board, Maynilad and Manila Water, and other stakeholders.

The award aims to promote collaboration among stakeholders for maximum gains in attaining water sustainaibility for the country.

“Under the leadership of District Engineer Gutierrez, DPWH Camarines Norte DEO implemented numerous programs with regards to saving water and our environment,” the department said.

“The DEO’s Adopt-a-Mountain, Adopt-a-Mangrove Program harmonized all the greening efforts and similar initiatives of the government, private sectors, LGUs, NGOs and the civil society,” it added.

The DPWH said that under the program, over 22,000 mahogany/narra seedlings were planted on 12 different planting sites in Camarines Norte during the simultaneous tree and mangrove planting activities held on October and November 2018 and March 2019.