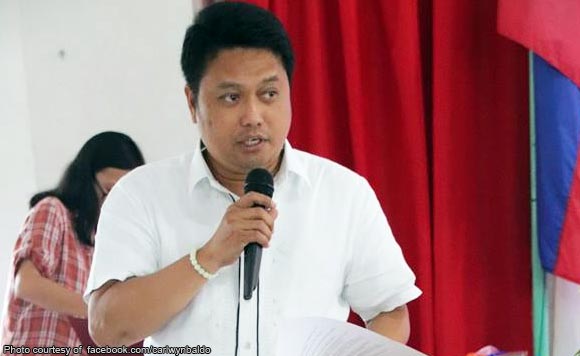 0 708
Share
Want more POLITIKO News? Get the latest newsfeed here. We publish dozens and dozens of politics-only news stories every hour. Click here to get to know more about your politiko - from trivial to crucial. it's our commitment to tell their stories. We follow your favorite POLITIKO like they are rockstars. If you are the politiko, always remember, your side is always our story. Read more. Find out more. Get the latest news here before it spreads on social media. Follow and bookmark this link. https://goo.gl/SvY8Kr

In an interview, the younger Batocabe said, “The wheel of justice was moving and I am thankful for the bravery of the government prosecutors (who) are unanimously establishing probable cause and charging with murder and attempted murder those responsible (for) the killing of my father and his police escort.”

He said the DOJ panel of prosecutors has found enough evidence to pin down the suspects and filed the resolution on Thursday, asking the court to issue an arrest warrant with no bail recommendation to Baldo and five others.

Batocabe said the ball is now in the hands of the court for due consideration and evaluation whether to uphold the DOJ resolution.

He expressed hope that once the court decides positively on the resolution, an arrest warrant would immediately be issued to Baldo, who was tagged as the mastermind in the killing of Rep. Batocabe and his police escort late last year.

AKB Rep. Alfredo Garbin, when asked for comment, said, “Finding probable cause on two counts of murder and six attempted murder is just a first step towards bringing justice to my colleague Rodel and police officer Diaz.”

“Foremost, we need the active participation of the key witness during the trial and the law enforcement and we expect a fair and impartial trial from the competent court, which should be issuing a warrant of arrest to all the accused since this is a non-bailable offense,” he said.

Meanwhile, Baldo’s family declined to give an official statement, saying only that they are leaving the matter to their legal team, said a source close to them who asked not to be identified.

The DOJ panel of prosecutors, led by provincial prosecutor Richard Cu, filed last March 29 murder and attempted murder charges against Baldo and Danilo Muella as an accomplice, as well as five others.

Batocabe and Master Sgt. Orlando Diaz, his police escort, were killed during a gift-giving event in Barangay Burgos, a remote village in Daraga town, last December 22.

The complaint against Ramon Marbella, one of the suspects, was dismissed for lack of probable cause.

All the suspects are currently detained at the custodial facility of the Criminal Investigation and Detection Group here.

The DOJ resolution has reportedly been submitted to the Regional Trial Court in Legazpi for raffle procedure. (PNA)