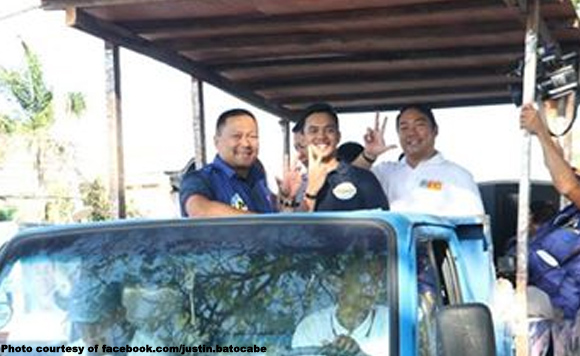 0 530
Share
Want more POLITIKO News? Get the latest newsfeed here. We publish dozens and dozens of politics-only news stories every hour. Click here to get to know more about your politiko - from trivial to crucial. it's our commitment to tell their stories. We follow your favorite POLITIKO like they are rockstars. If you are the politiko, always remember, your side is always our story. Read more. Find out more. Get the latest news here before it spreads on social media. Follow and bookmark this link. https://goo.gl/SvY8Kr

Justin Batocabe, son of slain Ako Bicol Rep. Rodel Batocabe, is campaigning for the same party list his dad headed and is helping politiko allies at the same time.

Justin went around in a motorcade with reelectionist Senator JV Ejercito in Daraga recently and helped him stump for votes.

In a Facebook post, Justin said he was honored to go around with Ejercito, who was just like his late father Rodel— a hardworking public servant who was concerned with healthcare.

He seems to have found a kindred spirit in Ejercito.

Will they be victorious in their respective bids in the May elections?