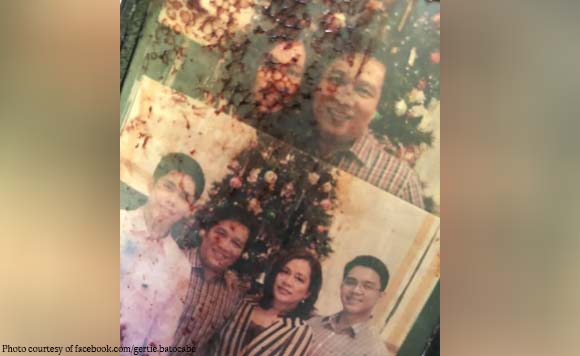 0 1,663
Share
Want more POLITIKO News? Get the latest newsfeed here. We publish dozens and dozens of politics-only news stories every hour. Click here to get to know more about your politiko - from trivial to crucial. it's our commitment to tell their stories. We follow your favorite POLITIKO like they are rockstars. If you are the politiko, always remember, your side is always our story. Read more. Find out more. Get the latest news here before it spreads on social media. Follow and bookmark this link. https://goo.gl/SvY8Kr

The bloodstained wallet of slain Ako Bicol Rep. Rodel Batocabe showed what was important to him.

Gertie shared photos of the bloodied wallet when it was returned to her by the morgue.

It has been three months since the politiko was slain by gunmen who ambushed him as he was leaving a gift-giving event in Daraga, and the incident remains painful.

In her post, Gertie said she misses her husband so much and wondered, probably not for the first time, why they have to kill him.

(His wallet when returned to me by the morgue together with his clothes. We miss you so much Bá. Why do they have to kill you?),” Gertie posted.