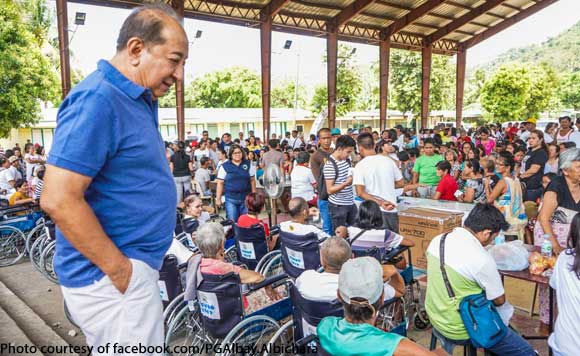 0 508
Share
Want more POLITIKO News? Get the latest newsfeed here. We publish dozens and dozens of politics-only news stories every hour. Click here to get to know more about your politiko - from trivial to crucial. it's our commitment to tell their stories. We follow your favorite POLITIKO like they are rockstars. If you are the politiko, always remember, your side is always our story. Read more. Find out more. Get the latest news here before it spreads on social media. Follow and bookmark this link. https://goo.gl/SvY8Kr

Representatives from the Provincial Government of Albay (PGA) distributed 30 wheelchairs were distributed.

Bichara, meanwhile, expressed gratitude to doctors who rendered their services just to make the event possible.

The governor also mentioned the plan to have a hospital expansion in Polangui due to the congested area in Ligao City Emergency hospital.

“This is to primarily cater the patients from Polangui area having complete amenities and facilities,” said the province.