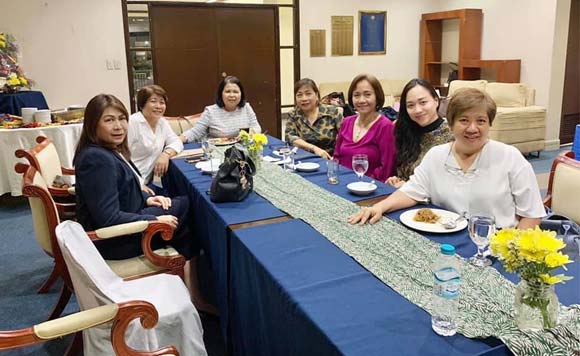 The Lex Athenia Victoria is an Ateneo Law School-based organization, which Revil is a member.

“There are women we look up to other than our own mothers. Them among others are for me,” she said.

“Ateneo law school’s valedictorian who became Dean & Senior Partner of a prestigious law firm, two RTC judges, 1 president/head of all clerks of court of the Philippines, another lawyer businesswoman who owns a beautiful resort in Boracay & one a great mother who’s busy campaigning for her son who’s running for mayor in the metro,” the vice governor said.

Revil said that it’s a privilege and inspiration to be with these ladies every time they hold Lex Athenia Victoria Board of Trustees meeting.

“We are planning for our upcoming anniversary. I’m so proud to call them sisters,” she said.

Revil also said that her “sisters” asked her about the local campaign. She is running for Masbate congresswoman.

“Well unlike other jobs/career where when you perform your best you get promoted or qualified for it, politics is not all up to just my performance,” she said.

“I know I deserve and am best qualified to be a Congresswoman & represent my province in the national arena. Then again, the electoral system is very challenging- money talks & votes too.
The more money, the more votes,” Revil said.

Revil said she’s just leaving her fate to God this coming May 2019 elections.

“So yeah let’s see where it goes. I just said & will always say— God’s will be done,” she said.