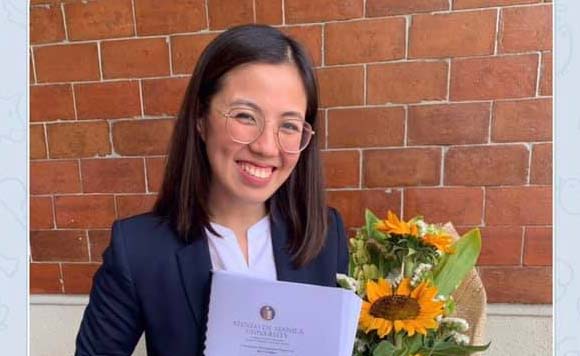 Vice President Leni Robredo’s daughter Trisha has shown that she is a smart, accomplished young lady.

She shared that she was not with Trisha when the latter was due to defend her STRAMA, or Strategic Management, which was the last step before she earns her MBA.

The Vice President had to be in Tueguegarao, so she just prayed for Trisha, who was nervous. Thankfully, older sister Aika was there to give her moral support.

When Robredo landed back in Manila, she learned that good news that Trisha completed her defense.

And now that her MBA is done, she is set to complete her medical degree next year.

The VP never runs out of reasons to congratulate her daughters!

“Tricia was scheduled to defend her STRAMA today, the final step before she earns her MBA degree. I was in Tuguegarao for the day for a speaking engagement so all I could do was drop by the church to pray for her. Sent her this pic while I was in church and she said she was having the jitters already.

Thank you to Aika who stayed at a coffee shop outside the school to give her moral support while the defense was going on.

When my plane landed back in Manila, I got this message on my phone.

So, yay for Trish!! MBA done. Med degree next year. But the sleepless nights continue🙏🏻Congratulations!! And thanks again to Aika for being the Dad, Mom and big sister this afternoon,” Robredo posted.