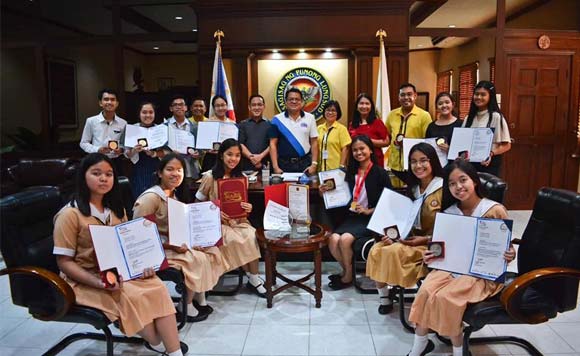 0 489
Share
Want more POLITIKO News? Get the latest newsfeed here. We publish dozens and dozens of politics-only news stories every hour. Click here to get to know more about your politiko - from trivial to crucial. it's our commitment to tell their stories. We follow your favorite POLITIKO like they are rockstars. If you are the politiko, always remember, your side is always our story. Read more. Find out more. Get the latest news here before it spreads on social media. Follow and bookmark this link. https://goo.gl/SvY8Kr

Calapan City Mayor Arnan Panaligan has welcomed in his office the students of Holy Infant Academy who joined a technology expo in Malaysia.

The said academy was the only school in the Philippines that qualified to join the Malaysian Technology Expo.

“The Holy Infant Academy was the only school in the Philippines that qualified to participate in the Malaysian Technology Expo after the students’ scientific papers that they earlier submitted passed the initial screening,” it added.

According to the city government, the students “successfully defended their papers” during the expo, which earned them gold, silver and bronze awards.

The students were accompanied at City Hall by their science advisers and parents during the courtesy visit.