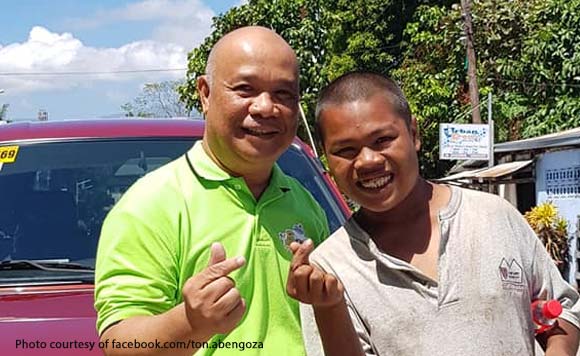 Brooke’s Point, Palawan gets to be clean not just because of the efforts of its officials.

There are also ordinary citizens on the street who do their part for the town, and one of them is Tiwi from Barangay Mainit, according to Councilor Ton Abengoza.

Abengoza shared a photo of him and Tiwi on Facebook, and said Tiwi is a great help to the environment.

This is because Tiwi could always be seen roaming around collecting empty plastic bottles. This helps keep the town and its waterways clean and free of materials that could clog it.

Abengoza also said Tiwi always greets him with a smile and a request for food and snacks. Tiwi never fails to call him Kagawad Ton as well, much to the councilor’s amusement.

Tiwi is a treasure for Brooke’s Point!

“With my friend “Tiwi” from Bgy. Mainit. Everytime he sees me, he always greet me with sweetest smile he can offer! 🙂

In every sentence he said, expect the word: “Kagawad Ton” to be always included. Real funny kid indeed! 🙂

Tiwi is a great help in environment:

You can see this boy everyday roaming around the town collecting empty plastic bottles, unaware that he is helping Brooke’s Point clean and reducing plastic wastes on the process!” Abengoza posted on Facebook.