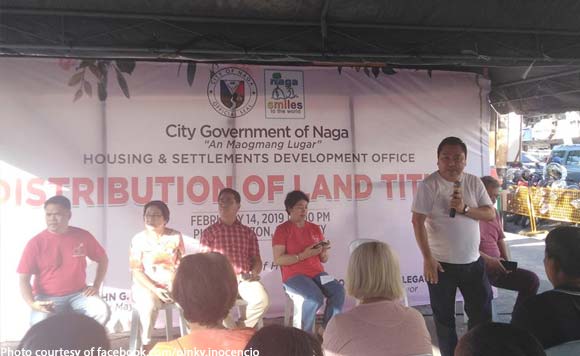 It was a different Valentine’s Day gift but nevertheless a very special one.

The Naga City government has distributed land titles to 51 families last February 14 to help them build their own homes.

Mayor John Bongat led the distribution of land titles to the qualified beneficiaries.

“The kind of a Valentines Gift we can share for the less privileged families in the city– helping them have their own place where they can build their own homes,” the City Government said.

“51 Urban Poor beneficiaries received their respective land titles in the Land Title Distribution of the City Government of Naga thru the Housing Settlements and Development Office (HSDO). Congratulations,” it added.

“20 couples exchanged their sweet marriage vows this Valentines Day in the Civil Mass Wedding of the City Government of Naga at Plaza Rizal. Also, as a symbol of the unity in relationship they are sharing as a couple, the newlywed locked their ‘couple padlocks’ at the Plaza Rizal Love Locks Circle,” the city government said.