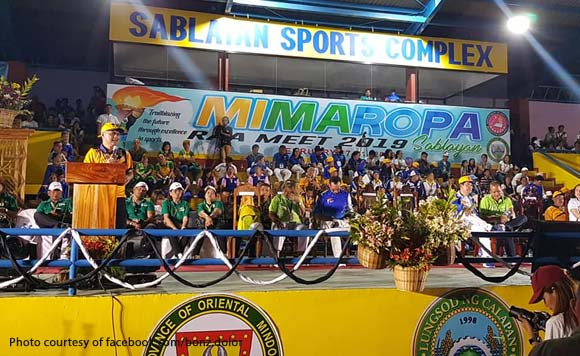 It’s not something he gets to do regularly, but Oriental Mindoro Vice Gov. Bonz Dolor was more than happy to step up to the plate when he was asked to speak at the MIMAROPA Regional Athletic Meet at Sablayan at the last minute.

In a Facebook post, Dolor recounted that he was not scheduled to speak at the event, but the guest of honor, Energy Secretary Alfonso Cusi, as called to a meeting in the palace. Cusi’s representative also had to leave early upon the advice of his helicopter pilot.

Dolor said he was used to high-ranking officials being tasked to speak at these kinds of events, but when he was asked to give a speech, he agreed.

He thanked Cusi for trusting him to deliver his message for the athletes and was more than happy to be of help.

It was an experience he would cherish forever.

If he succeeds in his political plans this May, he’ll probably get invited to more speaking engagements in the future!

“ATM: My experience today is something I will forever cherish. I decided to attend the MIMAROPA Regional Athletic Meet at Sablayan, Occidental Mindoro to show my support to the Oriental Mindoro Delegation. But to my surprise, I became the instant Guest Speaker during the Opening Program, an honor usually reserved for high ranking government officials! The original guest speaker, one of the country’s hard working Cabinet Secretaries, did not make it as he was called for a meeting in Malacañang, and so he sent one of his most trusted, Usec. Doneng Marcos. But upon the advise of his chopper pilot, he had to leave even before the program started. At yun na ang nangyari! Thank you very much DOE Sec. AL CUSI for trusting me to deliver your message of inspiration and hope for the MIMAROPA Delegations. To God be the Glory! #ItoAngGustoKo #GOBonz #MIMAROPARAA,” Dolor posted.