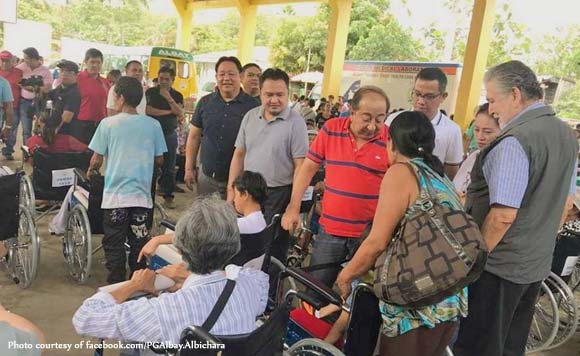 Together with Bichara was the key officials from the Provincial Social and Welfare Development Office (PWSDO).

According to the province, the said medical mission is in line with Governor Bichara’s advocacy to strengthen and give medical assistance to Albayanos “by providing free eye-glasses, medical and dental check-ups, and distribute free medication to beneficiaries from 15 barangays of Libon, Albay.”

“Thirty wheelchairs were also distributed among persons with disabilities coming from the remote areas of the municipality,” the province said.

Meanwhile, Bichara also recognized the efforts of Libon local government headed by Mayor Das Maronilla for their participation and involvement to make the event come into reality.

Bichara also acknowledged the contribution of Rep. Fernando V. Gonzalez as they partnered up to materialize their advocacy for the residents of the 3rd district of Albay.

Meanwhile, the province said that another medical, dental and optical mission will be held this February 19,
at Polangui, Albay.

“Social services and medical missions have become a regular program of the Provincial Government of Albay since the start of the administration of Governor Bichara, this is in line with his advocacy to deliver to the needs of the people especially to those in far-flung barangays who cannot go to city or town centers to avail of the services,” said the province.