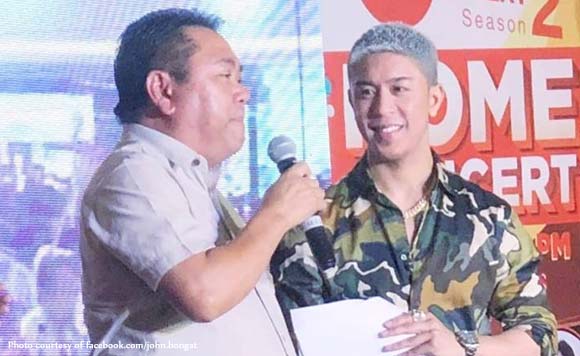 Aside from being an outstanding local executive chief, Naga City Mayor John Bongat is also a composer.

And the mayor-slash-composer had the privilege to meet last night the singer of his composition R&B star Kris Lawrence.

“THE COMPOSER (me) MEETS THE SINGER FOR THE FIRST TIME! Well, of course, you don’t know that my original musical composition (OPM) entitled “Waiting for You” was recently recorded by the country’s R&B and soul singer Kris Lawrence, dubbed as the “Bruno Mars” of the Philippines,” Mayor Bongat shared.

“Please watch out for the release of this song on itunes or spotify, with no less than your mayor as composer,” he added.

Kris Lawrence was in Naga City last night to host a concert at the Universidad de Sta. Isabel.

“[H]e was here in Naga last night to host the first ever solo concert of Bicolana diva Paula Guevara from Universidad de Sta. Isabel, Naga City, who will represent South Luzon in the Grand Finals of Wishcovery Season 2 at the Smart Araneta Coliseum on February 26, 2019 at 7pm,” the mayor said.

“Please support our very own Paula Guevara win the Philippines’ biggest online singing competition among the best young singers from Luzon, Visayas and Mindanao by going to Araneta or by viewing her videos on Wishcovery youtube channel,” he added.

Bongat also urged Nagueños to support the upcoming single of Kris Lawrence featuring the song he composed titled “Waiting for You”.