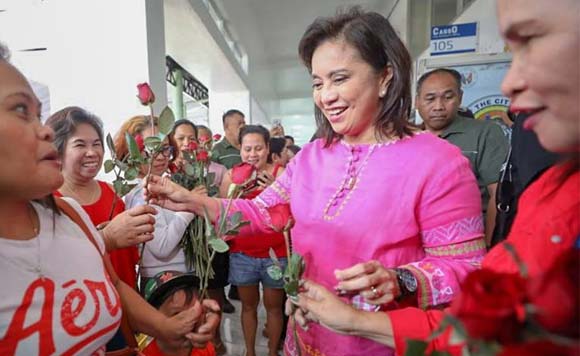 The Vice President spent her Valentine’s Day morning at the Naga City hall, where her husband served as mayor when he was still alive.

“Spent Valentine’s Day morning at the City Hall to give out roses, just as Jesse did in all his years as Mayor,” the Vice President said.

“It’s always a joy to be home, to feel the warmth that has made Naga our happy place, and to continue a tradition that keeps my husband close to the hearts of the people he loved and served,” she added.

Also, in Naga City, a civil mass wedding was held at the Plaza Rizal during the Valentine’s Day yesterday.

A total of 20 couples exchanged their sweet marriage vows during the civil mass wedding initiated by the City Government.

“Also, as a symbol of the unity in relationship they are sharing as a couple, the newlywed locked their ‘couple padlocks’ at the Plaza Rizal Love Locks Circle. Congratulations to the Valentine couples,” the city government said.