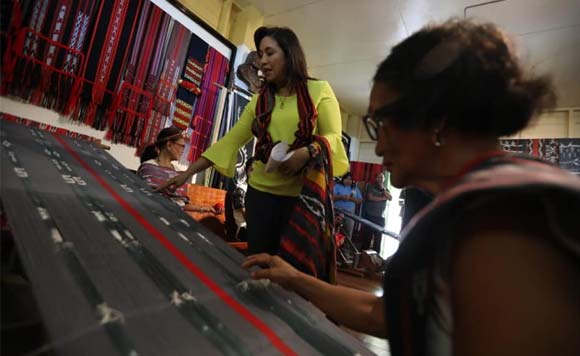 Robredo’s skirt made from a special fabric she received from the weavers was attacked on social media, with trolls claiming it was actually a death blanket.

But knowledgeable people were quick to come to the rescue and debunk the fake news.

In a Facebook post, Robredo said she visited Kiangan recently and met Mang Fernando, who received one of the weaving looms that her Angat Buhay Program donated.

It was Mang Fernando who weaved the cloth for her skirt, and it was confirmed that the skirt she wore was not a death blanket.

The false claims have not dampened efforts to help the weavers, with Robredo saying she tries her best to promote the products of these very skilled people.

Aside from giving them a livelihood, it also promotes their culture, she added.

She also said she apologized to them for the controversy, but they were instead grateful that they received a lot of inquiries on Facebook after she was bashed.

It’s a good thing that efforts to troll her backfired, and now there are more chances to help the Kiangan weavers!

“I was accused of wearing a “death blanket” for a skirt during the Rizal Day Rites at the Rizal Monument in Luneta. Fortunately, so many people corrected the false accusation.

Our Angat Buhay Program has been helping weaving communities, the Kiangan weavers in Ifugao, included. Last Wednesday, I visited Kiangan and had the good fortune of meeting Mang Fernando, one of the beneficiaries of the weaving looms we gave. Turned out he was the one who personally weaved the cloth I used for my skirt. They are a husband and wife team of weavers. Everyone assured me that my cloth was not a death blanket at all and showed me what real death blankets look like (see last picture in this album).

We are blessed to have very skilled weavers. We try very hard to promote their products because they need as much help as possible, not just for their livelihood, but also as a means of preserving their culture.

So, allow me to plug one more time. For works of the Kiangan weavers, you may send your queries directly to Mr. Marlon Martin at marlon.martin12@yahoo.com. Also check our Angat Buhay FB page (fb.com/AngatBuhayPH) for more updates on the communities we support,” Robredo posted.