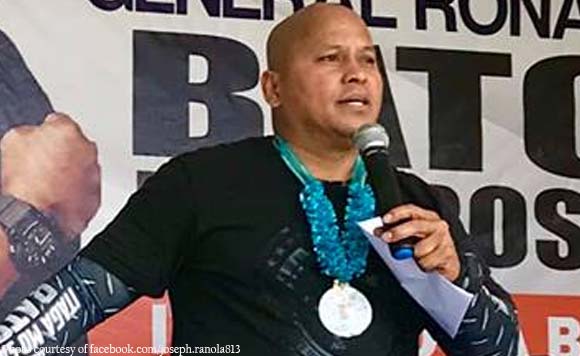 NAGA CITY — Former Philippine National Police (PNP) and Bureau of Corrections (BuCor) Chief Ronald “Bato” Dela Rosa on Wednesday asked forgiveness from Archbishop Rolando Tria Tirona of the Dioceses of Caceres in Naga City, for the lives lost as a result of the government’s campaign to eradicate drugs.

He admitted that it was during his administration at the PNP when most of the deaths occurred.

Dela Rosa said he believed the bishop would give him pardon.

In a separate interview with the Philippine News Agency, dela Rosa said he would push for three important bills if he would be given a chance to become senator.

“First, I will push for the return of death penalty for drug traffickers, not for user and pushers. Second, the return of police training to the PNP from the Public Safety College and last, legal assistance to all overseas Filipino workers (OFW),” he said.

He said the Philippines continues to be an illegal drugs destination because the country does not impose tough penalties on drug traffickers unlike neighboring countries, such as Malaysia, Singapore, and Indonesia.

Dela Rosa said he decided to foray into politics to help President Rodrigo Duterte accomplish his mission to eradicate corruption in government and continue the war against drugs.

The former PNP chief was the guest of honor and speaker at the “Public Awareness on the Government’s Campaign against Illegal Drugs” symposium held at the Naga College Foundation here. PNA