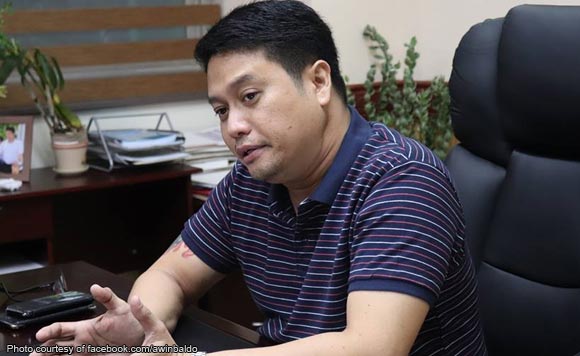 0 1,074
Share
Want more POLITIKO News? Get the latest newsfeed here. We publish dozens and dozens of politics-only news stories every hour. Click here to get to know more about your politiko - from trivial to crucial. it's our commitment to tell their stories. We follow your favorite POLITIKO like they are rockstars. If you are the politiko, always remember, your side is always our story. Read more. Find out more. Get the latest news here before it spreads on social media. Follow and bookmark this link. https://goo.gl/SvY8Kr

The Department of Justice (DOJ) on Friday confirmed that a travel ban sought by state prosecutors against Daraga, Albay Mayor Carlwyn Baldo has been granted by a local court.

“We received word that the Regional Trial Court of Legazpi City has issued a Precautionary Hold Departure Order (PHDO) against Mayor Carlwyn Baldo in relation to the Batocabe case,” DOJ spokesman Undersecretary Mark Perete said in a message to newsmen.

Baldo is the prime suspect in the killing of Ako-Bicol Party-list Rep. Rodel Batocabe and his police escort during a Christmas gift-giving event in Barangay Burgos, an upland village in Daraga town last December 22.

On January 7, the OIC-Provincial Prosecutor of Albay filed an application for a PHDO against Baldo and five others.

On Wednesday, the firearm used in the crime was recovered from a fishpond in Purok 3, Barangay Busay in Ligao City.

The information regarding the gun’s whereabouts was provided by Christopher Naval alias “Tuping”, one of six suspects in the assassination of the lawmaker. (PNA)