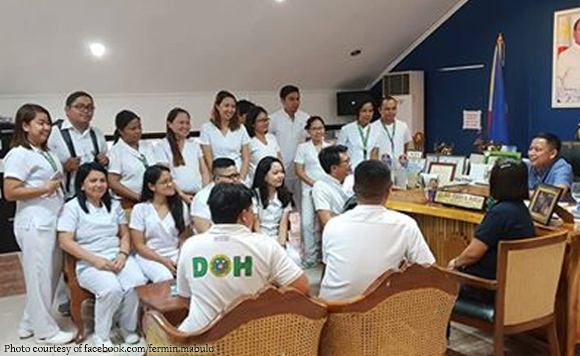 San Fernando, Camarines Sur Mayor Fermin Mabulo is happy to welcome new nurses assigned to the Department of Health office in his town.

But it is a bittersweet moment as they could not yet begin working since the national budget is not yet approved.

He did not mention the name, but it’s public knowledge that Camarines Sur Rep. Rolando Andaya has raised several questions about the budget, which was belatedly sent by the House of Representatives to the Senate.

Mabulo said this lawmaker and his local allies are acting in the same way. But unfortunately, it’s the people who are suffering, he added.

“Meeting with Nurses assigned by DOH to San Fernando. They cannot start work yet because the National Budget is not yet approved. Thanks to you who shall not be named (1st district Congressman running for Governor) for derailing the budgeting process… pareho kayo ng mga kakampi nyo dito sa local level. Taumbayan ang kawawa…,” Mabulo posted.