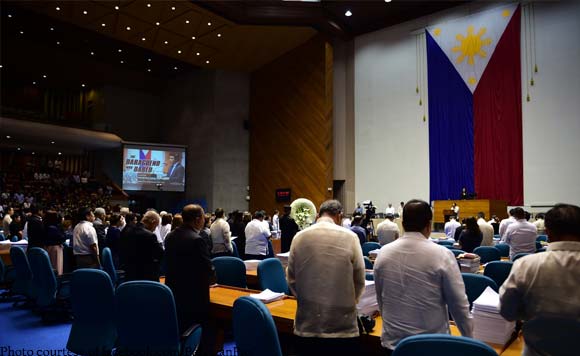 A memorial service was held yesterday at the House of Representatives for the slain solon, which was attended by the Ako Bicol representative’s colleagues at the lower chamber.

“It is said that the stars shine the brightest in the blackest of night. In this our dark night of despair, each of you, relatives, friends, and colleagues have been our shining light,” Atty. Batocabe said.

“Your words of empathy, love and encouragement fill us with the hope to endure the long night and meet each new day with heads held high. For that we are truly grateful,” he added.

The younger Batocabe said that his father’s life, albeit cut short, was lived to the fullest as he had touched everyone with his jolly disposition.

“His was a life dedicated to the people, my father always wanted to be close to them. He loved them dearly and the people loved him back. So much was their love that despite a declaration of a state of calamity, thousands braved the storm just to be with him until he was brought to his final resting place,” Atty. Batocabe said.

“He was relentless in his dreams, a transformative figure. He envisioned the Party-List coalition to be a force of good in these august halls. Some may have been skeptical of this – how can people of competing interests with the same electoral base cooperate with each other? However, my father saw the inherent goodness and desire of each party-list congressman to be better public servants beyond their parochial and personal interests. He called for unity, and they answered positively and overwhelmingly,” he added.

Atty. Batocabe urged the friends and colleagues of his father at the lower chamber to honor his legacy by continuing his good deeds in public service.

“His mission with the party-list coalition and in Congress having been realized, it now falls unto us all to continue his fight. We will not allow greed and violence ruin my father’s beautiful hometown. We will not allow the injustice of indolent leadership,” Atty. Batocabe said.

“Together, we shall honor his memory by continuing his good deeds of public service. We will make sure that his dreams for a prosperous Daraga and for a progressive Bicol region become a reality,” he added.

Rep. Batocabe and his aide SPO2 Orlando Diaz were killed last December 22 while attending a gift-giving event in Daraga, Albay.