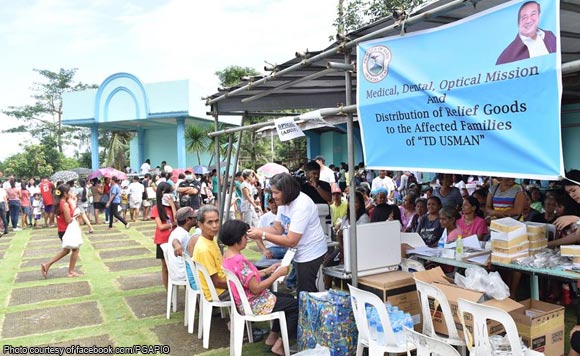 The Provincial Government of Albay hold yesterday a simultaneous relief and medical mission in three venues in the Municipality of Tiwi.

The first of the three venues visited was the Naga National High School, which xurrently houses approximately 200 families.

“Governor Bichara ordered the immediate mobilization of a team to construct temporary relocation houses for the affected families so that students in the evacuation center will not be further disrupted,” the provincial government said.

The next venue visited by Bichara was the Barangay Sogod.

The Governor said that they are now looking for permanent relocation sites for residents of the areas where the landslides occurred.

“We have found out that there are deep cracks in the mountains already, it is not safe for you to live there anymore, we will find land and build houses for you, your safety is our priority,” Bichara was quoted as saying.

The third venue visited was the Barangay Joroan at the famous Joroan Church where the operations were held at the church grounds.

“Hundreds of residents from surrounding barangays flocked to the venue to avail of the services being offered for free,” said the provincial government.

“Governor Bichara proceeded to make ocular inspections of areas damaged by the landslides and flooding along the highway and at Barangay Joroan, and also at Barangay Putsan were the proposed relocation site is located,” it dded.

The PGA Team was composed of a good number of medical and dental staff, social workers, members of Youth Organizations, and workers from various other departments.