Albay gets P500K from PCSO for TD Usman victims 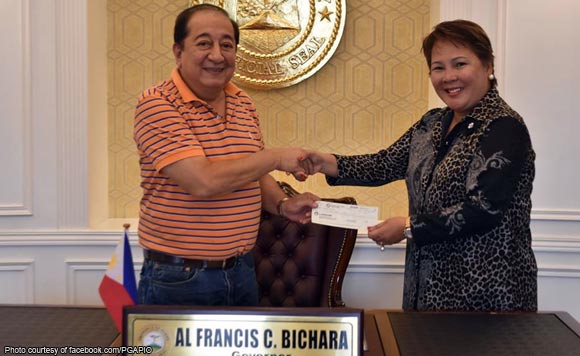 0 657
Share
Want more POLITIKO News? Get the latest newsfeed here. We publish dozens and dozens of politics-only news stories every hour. Click here to get to know more about your politiko - from trivial to crucial. it's our commitment to tell their stories. We follow your favorite POLITIKO like they are rockstars. If you are the politiko, always remember, your side is always our story. Read more. Find out more. Get the latest news here before it spreads on social media. Follow and bookmark this link. https://goo.gl/SvY8Kr

The Philippine Charity Sweepstakes Officr has provided a financial assistance to the tropical depression Usman-hit province of Albay.

The PCSO donated P500,000 to the province intended to the victims of TD Usman in the province.

“PCSO Board of Directors Member Sandra Cam, along with her entourage from the same agency, paid a courtesy visit to Albay Governor Al Francis Bichara and handed over a check worth P500,000 as augmentation for the funds currently being used as assistance and relief for the barangays and families that were severely affected by the recent Tropical Depression Usman,” the province said.

Albay province has been placed under the state of calamity amid the onslaught of TD Usman in Bicol Region.

“Severe landscapes and flooding plagued Albay which resulted to several deaths and injuries as well as the displacement of a number of families whose houses have been destroyed or damaged,” the province said.