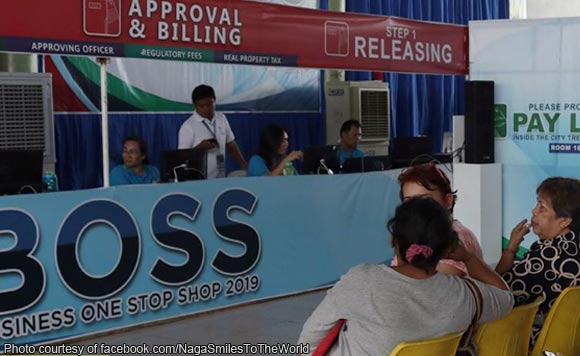 The BOSS program aims to hasten the process of business registration and the ease of doing business in the city.

The said program “simplifies the procedure” of getting and renewing business permits in just three steps:

The program is being implemented with the help of personnel from the City Engineer’s Office for the building regulations, City Planning and Development Office that is concerned with zoning, City Health Office for the monitoring of sanitation and other health concerns, City Environment and Natural Resources Office for environmental hazards, City Treasurer’s Office for the collection of payments and the Bureau of Fire Protection which checks the fire safety of the establishments among others, all situated in one place.

“With the convenience it offers considering the centralized system of processing of documents, BOSS aims to help complete all necessary transactions of getting permits within hours less than half of the day—helping business owners to minimize the cost of registering and renewing the permits of their businesses,” the city government said.

“To further promote efficiency, the BOSS also practices the processing by exception—not necessarily completing the process by working only with offices that are concerned with the deficiences of their business requirements,” it added.

The City Government said that it was able to collect P250 million worth of taxes, way higher than the target of just P 46M.

For this year, the city targets to collect P280 million of taxes.

The city government said that it expect to collect more taxes from shopping malls.

“With the rise of new shopping malls and cinemas in the city, the LGU is expectant of still more taxes that will be collected,” said the city government.

“The last date of payment for business taxes without the imposed penalty is on January 21, 2019 while the last date of releasing of Mayor’s Permit without penalty will be until January 31, 2019,” it added