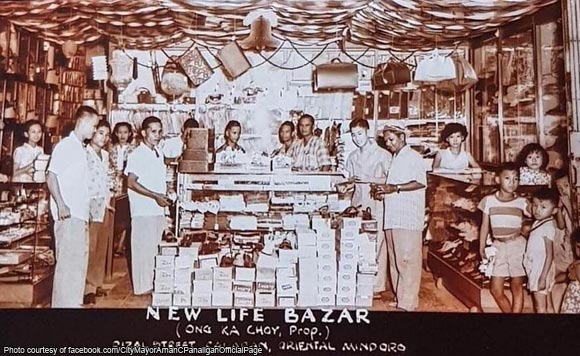 Mayor Arnan Panaligan has took a trip down memory lane as he shared a photo of Calapan City in 1950s.

“The bazaar then was the equivalent of the present day department store,” the Mayor said.

“Many decades later, Mr. Ong Ka Choy’s daughter, Mrs. Felie Go, would establish the first mall in Calapan City and in Mindoro Island for that matter, the Citymart Island Mall (year 2000) and in 2018, she would open the much larger Nuciti Mall with her husband, mall magnate Mr. Carlito Go,” he said.

Mayor Panaligan said that the photo looked like it was taken during Christmas season as shown by the decors.

“This picture must have been taken on Christmas time as evidenced by the Christmas decors in the ceiling, notably the paper bell lantern hanging above that was one of the common holiday decors during our childhood years in the 1970s,” said the mayor.

“I don’t see that kind of paper bell lantern nowadays. The children and the folks in the picture must be having their Christmas shopping at the New Life Bazaar,” he said.