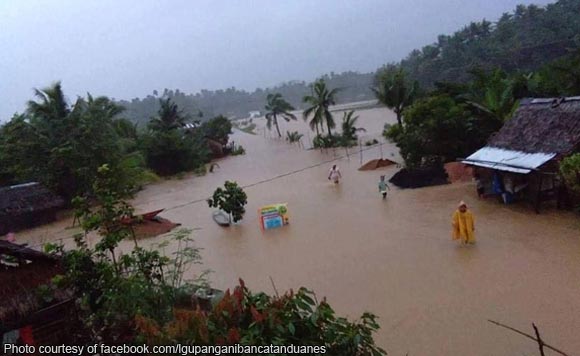 0 963
Share
Want more POLITIKO News? Get the latest newsfeed here. We publish dozens and dozens of politics-only news stories every hour. Click here to get to know more about your politiko - from trivial to crucial. it's our commitment to tell their stories. We follow your favorite POLITIKO like they are rockstars. If you are the politiko, always remember, your side is always our story. Read more. Find out more. Get the latest news here before it spreads on social media. Follow and bookmark this link. https://goo.gl/SvY8Kr

The Province of Albay’s agriculture sector has dealt with a huge blow due to the wrath brought about bt Tropical Depression Usman.

Initial reports showed that TD Usman caused damage and losses to agriculture amounting to more than half a billion pesos.

“According to a partial crop damage report submitted by Provincial Agriculturist Cheryll Rebeta, as of January 2, 2018, the damages to rice, corn, vegetables, and rootcrops in Albay has resulted to production loss amounting to 521,018,193.50 pesos in total,” the Albay provincial government said.

The province said that in the rice sector, a total of 7,113 farmers wereaffected with 7,371.03 hectares of rice land damaged, cornering the lion’s share of damages amounting to P497,066,784.

Albay Governor Al Francis Bichara will meet with the Provincial Agriculturist and other Department heads of the PGA to create an action plan to help soften the blows dealt by the recent tropical depression.

Albay is currently under the state of calamity due to TD Usman.