75 deaths due to ‘Usman’ still being validated: NDRRMC 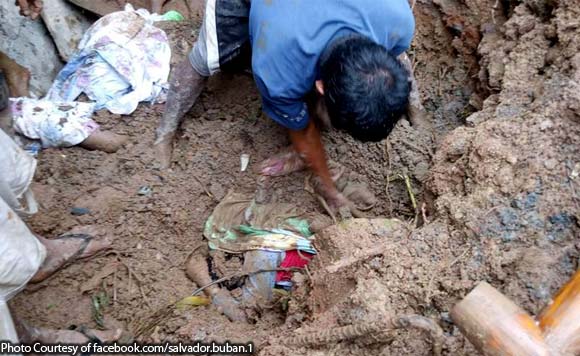 0 572
Share
Want more POLITIKO News? Get the latest newsfeed here. We publish dozens and dozens of politics-only news stories every hour. Click here to get to know more about your politiko - from trivial to crucial. it's our commitment to tell their stories. We follow your favorite POLITIKO like they are rockstars. If you are the politiko, always remember, your side is always our story. Read more. Find out more. Get the latest news here before it spreads on social media. Follow and bookmark this link. https://goo.gl/SvY8Kr

The National Disaster Risk Reduction and Management Council (NDRRMC) is still verifying reports that floods and landslides, triggered by inclement weather caused by Tropical Depression Usman, have so far caused the death of 75 persons in Mimaropa, Bicol and Eastern Visayas.

Verification is being conducted by the Management of the Dead and the Missing Cluster, which is spearheaded by the Department of the Interior and Local Government.

This was disclosed by the agency in its 6 a.m. update released Tuesday
and signed by NDRRMC executive director Ricardo Jalad.

Also undergoing validation are reports of 16 persons missing and 12
individuals injured in the above-mentioned regions.

“Usman” has so far affected 45,348 families, which is equivalent to
191,597 individuals residing in 457 barangays in Calabarzon, Mimaropa,
Bicol and Eastern Visayas.

The NDRRMC also reported that 92 road sections and three bridges in
Mimaropa, Bicol, Western Visayas and Eastern Visayas were affected by
“Usman”, with 51 already passable as of this posting. (PNA)