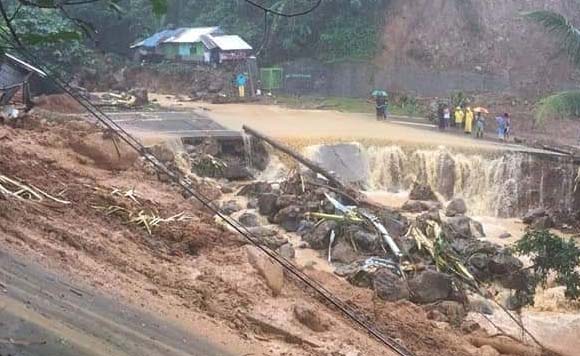 The head of the Office of Civil Defense (OCD) in Bicol is blaming climate change for the disaster that recently struck the region, where 57 people died in landslides and flooding spawned by the low-pressure area (LPA) that has caused heavy rains here in the past two days.

“Zero-casualty is our constant goal, but there are situations beyond our control — the unusually heavy rains caused by climate change,” OCD Regional Director Claudio Yucot said in a phone interview on Monday.

He said that after the local weather bureau downgraded the storm warning signal 1 to an “LPA accompanied by the tail end of the cold front (TECF),” people were not expecting that this would bring heavy rains that would trigger landslides and floods.

“We have disaster protocol when it comes to typhoons, storms; but there are none for LPA and TECF,” he said.

He even dismissed the report that members of various local disaster councils were on vacation mode and villagers were stubborn and refused to be evacuated because of the declaration that the tropical cyclone has been downgraded into an LPA.

Along with this, Yucot said he would propose to the National Disaster Risk Reduction Council to prepare disaster protocols for weather disturbances, such as LPA and TECF.

Meanwhile, Cedric Daep, chief of the Albay Public Safety and Emergency Office, said areas hit by landslides in two villages in the town, where at least 12 people died, were not considered landslide-prone areas by the Mines and Geosciences Bureau.

He said the villages of Sugod and Lourdes in Tiwi have no history of landslides, except for Barangay Sugod, which is a flood-prone village.

In an interview, Daep said the high-risk areas for landslide are the barangays of Dapdap and Misibis in Tiwi.

Asked what possible factors that could contribute in failing to meet the province’s “Zero Casualty Goal” policy, Daep said one is the complacent attitude of people in heeding the call to evacuate for reasons that it was only an LPA and TECF; second is because of the recent barangay elections, where newly designated barangay disaster officials were not yet trained to handle disaster operations.

Daep said the real culprit was the 437.1 mm rains that poured in Bicol in the past two days (Dec. 28 and 29). The rains breached by 84 percent the 520.2 mm of rainfall for the month of December, aside from the scattered rainfall on December 26 and 27.

He said heavy rainfall spawned by the LPA followed by the TECF have saturated the soil, causing floods and landslide in several towns and cities of the province.

Daep said rain and landslide gauges would not suffice to serve as an early warning, as the rainfall threshold for the month was exceeded in the past two days.

He dismissed reports that the province failed to warn residents, saying local officials had issued an advisory to local disaster councils, warning them of the possible occurrence of floods and landslide caused by heavy rainfall from the low-pressure area and the tail end of the cold front.

Latest casualty count indicates that the death toll due to landslide and floods continues to rise, as 57 villagers have died, 11 injured, and 11 still missing in Bicol, the OCD report said.