Ako Bicol Rep. Batocabe’s widow says no decision yet whether or not to run as Daraga mayor 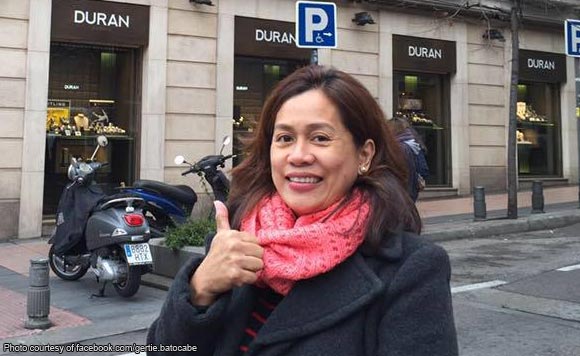 0 1,362
Share
Want more POLITIKO News? Get the latest newsfeed here. We publish dozens and dozens of politics-only news stories every hour. Click here to get to know more about your politiko - from trivial to crucial. it's our commitment to tell their stories. We follow your favorite POLITIKO like they are rockstars. If you are the politiko, always remember, your side is always our story. Read more. Find out more. Get the latest news here before it spreads on social media. Follow and bookmark this link. https://goo.gl/SvY8Kr

Gertie Duran-Batocabe, widow of slain Ako Bicol Rep. Rodel Batocabe, clarified that she has not made any decision yet whether or not to run as Daraga mayor, substituting for her husband.

Reports earlier said that President Rodrigo Duterte asked Gertie to substitute for the slain solon for his candidacy as mayor of Daraga.

However, Gertie said that that conversation was a “small part” of the things she discussed with the president.

“This was just a small part of the many things the president and I talked about during the meeting. This was not even in my agenda,” Gertie said.

“Yesterday, I was telling the media, in answer to the recent news stating that my husband daw cannot be substituted. How can that be when ‘no less than the president asked me to take his place’,” she added.

Gertie said that to decide for the substitution is something that shouldn’t be rushed.

“To say this is a difficult decision is an understatement. It is not something that has to be rushed and will need a clearer head and rested heart (at least),” she said.

She said that her focus right now is to bury her husband and to bring justice for his assassination.

“For now, all that I am focused on is to bury my husband with dignity and honor in the manner that he has lived his life. Then, to get justice which unfortunately is slipping futher every second,” she said.

The Ako Bicol solon and his aide were ambushed in Daraga last Saturday after attending a gift giving activity for senior citizens and PWDs.

Rep. Batocabe was serving his last term as party list representatives. He was vying for Daraga mayor prior to his death.