Rep. Batocabe’s widow thanks QC VM Joy Belmonte for helping her family in this ‘difficult time’ 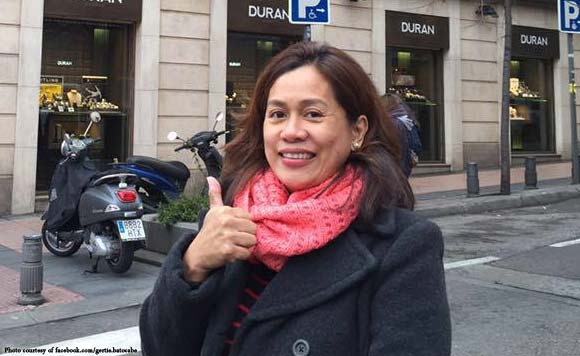 0 991
Share
Want more POLITIKO News? Get the latest newsfeed here. We publish dozens and dozens of politics-only news stories every hour. Click here to get to know more about your politiko - from trivial to crucial. it's our commitment to tell their stories. We follow your favorite POLITIKO like they are rockstars. If you are the politiko, always remember, your side is always our story. Read more. Find out more. Get the latest news here before it spreads on social media. Follow and bookmark this link. https://goo.gl/SvY8Kr

Gertie Duran-Batocabe, the widow of slain Ako Bicol Rep. Rodel Batocabe, thanked Quezon City Vice Mayor Joy Belmonte for being with them in this “difficult” time.

Belmonte flew to Daraga in Albay on Dec. 24 to visit Rep. Batocabe’s wake.

The QC vice mayor said that Gertie is a “very close friend” as they they worked together at the Congressional Spouses Foundation. Belmonte served the organization’s head during Rep. Sonny Belmonte’s term as House Speaker.

“His wife Gertie is a very close friend and an active member of the Congressional Spouses Foundation during my time as its head,” Belmonte said.

“She is also a ‘Duran’, a distant relative of my great grand uncle former Congressman Pio Duran, with whom my father lived with for sometime and who was one of his role models,” she added.

“I will never forget Cong Rodel because during my second term as VM, through me he so kindly donated a pick-up for the use of the Bicolano community in Brgy Commonwealth. I pray for the eternal repose of his soul,” Belmonte said.

Meanwhile, Gertie expressed her gratitude to Belmonte for spending time with her family.

“Thank you Joy for being with me during my most difficult time. I have always known Rodel was quite popular with his friends and colleagues but the degree of how much he is loved is really surprising and I am meeting a lot of people he had helped,” said Gertie.